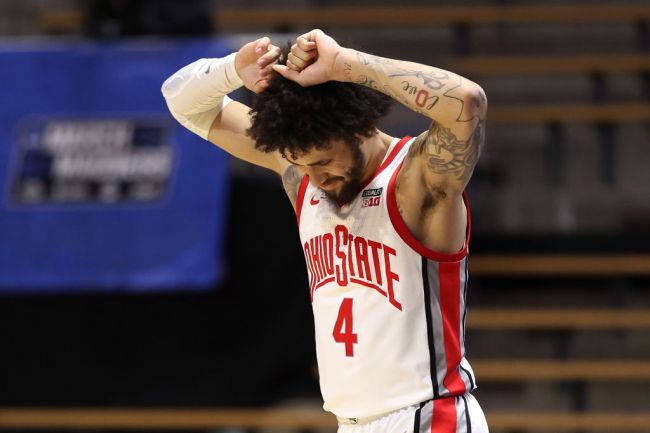 Oral Roberts won its first NCAA Tournament game since 1974 on Friday. MORE THAN 47 YEARS! The 15-seed out of the Summit League knocked off 2-seed Ohio State with a 75-72 overtime victory in the First Round and set March ablaze with madness.

The Golden Eagles entered the game as 15.5-point underdogs and came out looking like the favorites. Led by the nation’s leading scorer, the team that was a 4-seed in its conference tournament and made an improbable run to the Big Dance jumped out to lead at halftime and held on to win. If you are unfamiliar with Max Abmas, let this be your introduction. For starters, his name is pronounced ACE-mus. Don’t get it twisted. He averaged 24.2 points per game in the regular season and dropped 29 against the Buckeyes on Friday.

The nation's leading scorer put on a SHOW!

On the other side of the court, Duane Washington Jr. had a tough end to the season. He had two opportunities to win it, one coming at the end of the second half. With the game tied at 64, Ohio State brought the ball up and Washington took an isolation step back jumper as time expired.

He missed in regulation and the game went into overtime, where he missed two free throws, a layup and the wide-open look at the buzzer. The Buckeyes went 9-for-18 from the free throw line and committed 15 turnovers to their opponent’s 6. Simply cannot win a game like that. With the upset, the vast majority of brackets were busted. Of the nearly 15 million brackets submitted on ESPN’s Tournament Challenge, only 4.8% chose the Golden Eagles to win.

A whopping 13,992,289 brackets picked the Buckeyes to beat Oral Roberts – that’s 95.2% of all brackets. Of the 14.7 million brackets on @ESPNFantasy’s Tournament Challenge, only 103,125 remain perfect; 5.1 million perfect brackets were busted by Oral Roberts’ victory over OSU.

Oral Roberts will play 7-seed Florida in the Second Round.