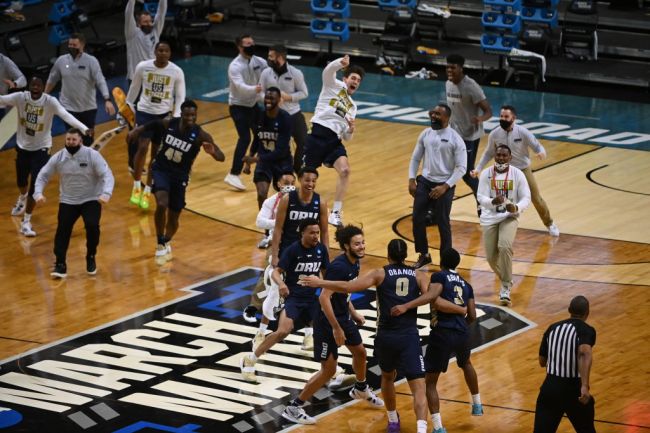 Only one person who filled out a bracket picked 15-seed Oral Roberts to reach the Sweet Sixteen. He/she was the only person to pick the game correctly. The Golden Eagles continued their historic run with another upset win over 7-seed Florida Gators and they did it in comeback fashion. After falling behind 42-37 at halftime, Paul Mills’ team had a less than seven percent chance of winning halfway through the second half. They battled back from as many as 11 down to take the lead back on their final possession and earn the school’s first Sweet 16 appearance since 1974— its second all-time.

15-SEED ORAL ROBERTS IS HEADED TO THE SWEET SIXTEEN. THIS IS MARCH! pic.twitter.com/I7xhOLAE5O

Oral Roberts beat Ohio State in the First Round and will face 2-seed Arkansas with hopes of being the first 15-seed to ever reach the Elite Eight. Florida Gulf Coast was the first and only 15-seed to reach the Sweet 16 with their legendary run in 2013. Coincidentally, the ‘Dunk City’ Eagles lost to Florida in their final game of the NCAA Tournament that year. After beating Florida, the Golden Eagles are moving on to the Sweet Sixteen. I am fully convinced that this is a sign that the historic win is coming, but Eric Musselman and the Razorbacks may have something to say about that.

Either way, it’s a tough night to be a Gator.

Meanwhile, at the University of Florida… pic.twitter.com/ELzdMrLuaB

Max Abmas (ACE-mus) continues to live up to his expectations as the nation’s leading scorer during the regular season. He and forward Kevin Obanor combined for 54 of the team’s 81 points (exactly two-thirds of scoring), with the former adding 7 assists and the latter adding 11 boards.

If you have not heard of the university, it is a small evangelical school in Tulsa, Oklahoma. Much like the Liberty of the West. Thus, its students were in direct violation of the rules when they gathered amongst one another in celebration of the school’s incredible upset. But who cares, THIS IS MARCH! THE RULES DO NOT APPLY! THE GOLDEN EAGLES CONTINUE TO DANCE!!!!!!!!! FIGURATIVELY AND LITERALLY!!!!!!!!!!!!!

Way too much dancing and celebrating going on here pic.twitter.com/k5X9x7MpqM

It is hard to imagine that Arkansas won’t have its way with ORU on paper, but that was also the case with Ohio State and Florida. Let’s not forget that only ONE person has them advancing this far in his/her bracket. But if Abmas, who averages 24.4 points per game, continues to show out and Obanor wins the battle on the boards against Jaylin Williams, anything can happen.