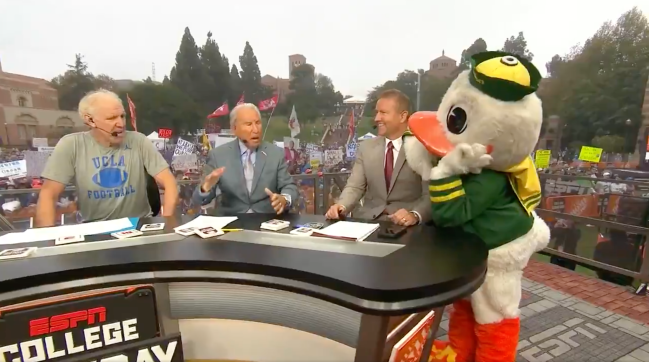 The Oregon Duck is one of the funniest mascots in all of college sports. Informally known as “Puddles,” he is always up to no good.

That was certainly the case on Saturday morning during College Gameday. For the first time in history, Kirk Herbstreit, Lee Corso, Rece Davis, Desmond Howard and the gang traveled to UCLA before its game against Oregon.

Before the sun even came up from behind the San Gabriel mountains, ESPN was live from campus in Westwood. The decent sized crowd was full of excitement and among those in attendance was Puddles.

And, as is per usual, he was incredibly mischievous.

During a live segment with the whole crew, Puddles posted up behind Corso and Herbstreit with a shake weight. He even got the latter to break character and crack up in the middle of a sentence.

Throughout the rest of the show, Puddles kept popping up in random places. Each time, he had a different sign.

His best sign took the opportunity to not only troll UCLA, but hype up a former Oregon quarterback, Justin Herbert.

Not long thereafter, he again popped up in the background of a live shot and was blowing kisses.

It's just a matter of time when you hear stuff like this 😂😔😅😅 pic.twitter.com/yP2hggs1D1

He then disappeared for awhile but showed back up with a declaration. Puddles is a duck of the people, after all.

The Oregon Duck saying what we all are afraid to pic.twitter.com/YtnZpuxCZW

At the end of the broadcast, however, he was extremely disappointed as his longtime friend Corso chose the Bruins.

And gets a kiss from Bill Walton 😂 pic.twitter.com/WSaD011jwT

Mascots are either hit or miss, but Puddles simply does not miss. Viva the Duck!