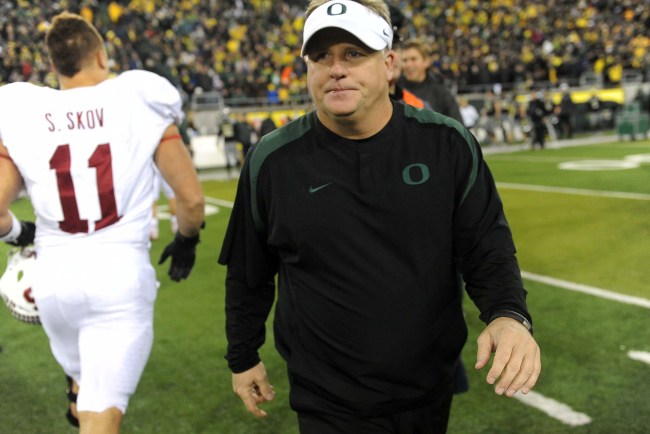 After losing head coach Mario Cristobal to the University of Miami, it appears the Oregon Ducks are running back to the loving arms of their ex. According to John Canzano of The Oregonian, the Ducks have asked to interview UCLA head coach to fill the vacant head coaching position he once held.

I’m told this search still has “moves to make" in the next 24-72 hours — but this may signal a shift back to what Oregon is comfortable with and knows. https://t.co/T8YUc2Sqfi

It’s a move that would make a lot of sense for both sides. Kelly has finally turned things around for the UCLA program, leading them to an 8-4 record this season.

The Oregon Ducks were also at their absolute best during Chip Kelly’s tenure. He racked up a 46-7 record over 4 seasons, winning the Pac-10 title 3 times and appearing in the BCS Championship game once. The Ducks also finished the season ranked in the top 5 in three of his 4 seasons with them finishing 11th in the other season.

He would eventually depart for a much less successful NFL coaching career. He went 26-21 with the Eagles before he was fired and signed on with the 49ers. He went 2-14 in his lone season in San Francisco.

Oregon has struggled to reach the heights of the Chip Kelly era in recent years. They made it back to the National Championship 2 years after his departure, but have fallen short of the College Football Playoff in every year since.

They might not actually end up with Kelly as their head coach, but at least looking into the option makes a lot of sense for the Ducks right now as they look to move on from Cristobal.