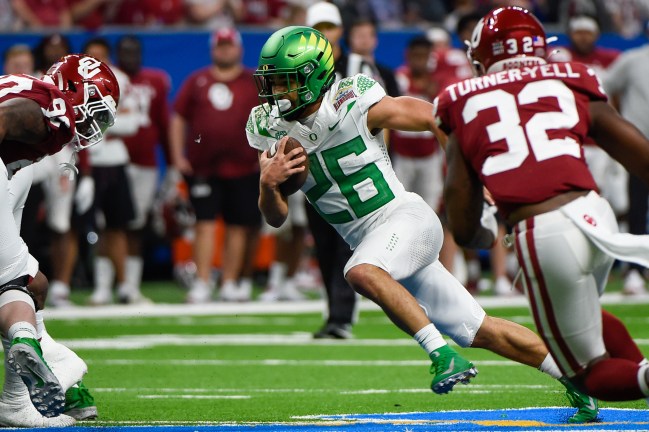 The college football transfer portal has seemingly been more active than ever this season. For the most part, the portal has been flooded with starting quarterbacks. Now one of the country’s most talented running backs has entered his name in the portal.

According to 24/7 Sports, Oregon running back Travis Dye has entered the transfer portal.

The Pac-12's leader in yards from scrimmage, No. 2 rusher, No. 2 in total touchdowns, and all-league running back Travis Dye out of Oregon is in the transfer portal. Total shock. Should be one of the most sought-after players in college football.https://t.co/k3JwFSTxra

It is a major blow for the Oregon program. Their head coach already left for Miami. They were already losing their starting quarterback. Two of Oregon’s other running backs are already in the transfer portal. They’ve also lost one of the draft’s top prospects on the defensive side of the ball.

Now they’ve lost their best offensive weapon. Oregon has landed a new head coach, but they’ll have a lot of rebuilding to do for next season.

Travis Dye put up monster numbers last year for the Ducks. He racked up 1271 yards and 16 touchdowns on the ground while averaging 6 yards per carry. He tacked on another 402 yards and 2 touchdowns receiving.

He was one of the few bright spots for the Ducks offense as they struggled down the stretch, but he’ll potentially have the chance to show what he can do in a more potent offense.

Dye will be one of the most sought after transfers in the portal during this offseason. Wherever he winds up, Travis Dye will provide an electrifying option that opponents will struggle to slow down.