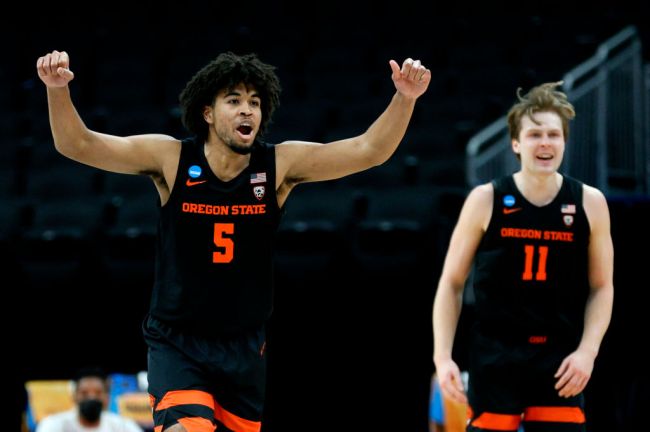 Oregon State is the hottest team in the nation after beating Tennessee in the First Round of March Madness and extended an incredible streak. With the win, a 12-seed has upset a 5-seed for the 51st time in 40 years. Instead of telling you the years that there has been a 12-over-5 upset, it’s easier to tell you the years that there hasn’t: 1988, 2000, 2007, 2015 and 2018. That’s the entire list. It also continues a streak for the losers from Knoxville, going 82 years without a National Championship.

The Beavers were picked to finish last in the Pac-12 and rolled into the conference tournament with a .500 record at the end of the regular season. They rattled off three-straight wins to earn their first conference tournament title, an automatic birth to the Big Dance and an opportunity to face the Volunteers— who were considered a potential sleeper picl. That winning streak continued on Friday as Wayne Tinkle’s squad took down their equally as orange-clad opponents 70-56 on Friday.

Oregon State went 10-of-21 (47.6%) from beyond the arc and 48.2% from the field, while Tennessee shot an abysmal 19.2% and 33.3%. In addition, the Beavers won the rebound battle 41-34. It was a clinic from the opening tip and they were firing on all cylinders. Four players scored in the double digits and a team effort let them to their first March Madness win since March 18, 1982. 39 years ago yesterday, the Corvallis kids took down Idaho in the Second Round.

Tinkle and the Beavers will look to continue that Second Round winning streak either in a battle of black and orange uniforms against Oregon State, or against Liberty.