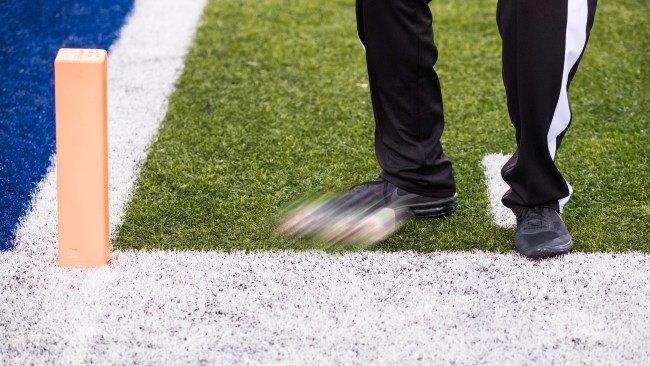 That’s right. The tradition born on October 30, 2016 at New Era Field in western New York has now become so permeated into NFL lore that you can actually wager on it happening each year.

Michael Abdallah is the man who threw an object onto the field during last nights Bills game. He is trying to make his way back to FLA where he lives without serving more jail time pic.twitter.com/laSrVg94Pt

But what about the Bills fans who got the whole tradition started? What kind of punishment have they faced? And are they sorry for starting this bizarre Bills Mafia tradition?

Well… for starters, they too were banned for life from New Era Field.

Not that Patriots players like Tom Brady or Gronk were offended. In fact, after it happened Brady said, “I did see it. Yes I did, I did see it. I thought it was funny the ref didn’t want to pick it up. He was kicking it. Nobody wanted to reach down and grab it.”

Dillon says Hub was ready to throw it in the first quarter, but he told him to wait because he “didn’t want to get kicked out right away.” It was the Patriots rivalry game, after all.

However, with the game starting to get out of reach, New England was winning 31-17 with 3:40 left in the third quarter and were about to score another touchdown, it was go time for launch.

“It got to that time where enough was enough,” Dillon said. “I gave him the green light. I said, ‘Hey, if you’re going to go, this is the time to go. They’re right in our end.’ ”

Added Hub: “We were getting smoked. I was ready. Right as the ball got snapped, I chucked it onto the field.”

“Sure enough, that night someone came to our house with two letters we had to sign for. It was signed by Roger Goodell. Every NFL stadium we’re banned from, and if we get caught on the property, we’ll be arrested for trespassing.”

It hasn’t stopped them from attending games, however. They just “stay low-key and disguise” themselves a little but, said Dillon.

As for whether they regret their actions on that fateful Sunday?

“One hundred percent, it was worth it,” Dillon said