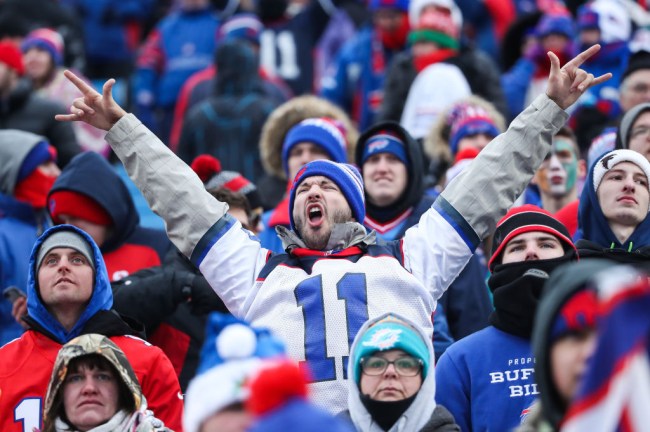 Over the past few years, Buffalo Bills fans have cemented themselves as the rowdiest fanbase the NFL has to offer thanks to their propensity to suplex one another through flaming folding tables while drinking copious amounts of Labatt Blue to numb the pain.

The organization has done what it can to try to tame them—including setting up surveillance towers outside of the stadium—but despite their best efforts, Bills Mafia refuses to be tamed.

This week, Bill Belichick had high praise for Bills fans when he was asked about them ahead of Sunday’s game, saying the Patriots were prepared to deal with the impressive amount of noise at New Era Field.

During a 2016 matchup between the two teams, a silicone meat cylinder was tossed onto the turf, and just like that, a new tradition was born.

Last year, three separate sex toys appeared on the field and one man was eventually arrested for contributing to the sausage fest. However, I highly doubt that’s going to deter more people from following in his footsteps, and if you feel the same way, you might actually be able to make some money.

On Wednesday, Odds Shark released some prop bets for this week’s game and it appears they also believe the field will be graced with at least one fake phallus, as “Yes” is currently sitting at -140 while “No” has even odds.

Don’t let me down, Bills Mafia. My wallet is counting on you.