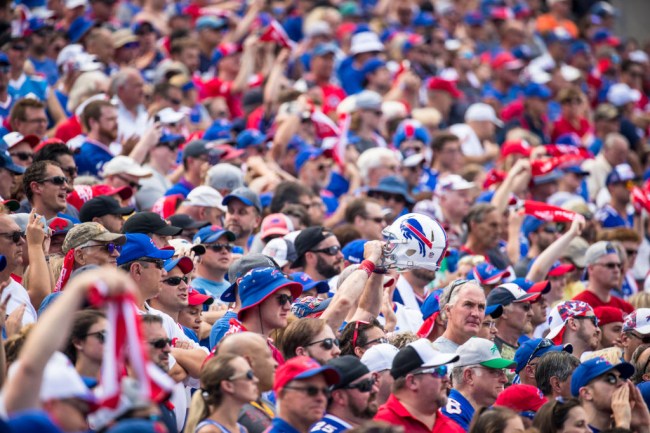 Back in November of 2016, dildo-throwing became a tradition for fans at New Era Field. Whenever the Patriots come to town, you can all but guarantee a giant rubbery meat popsicle getting flung onto the field of play. This year was no different.

Bills Mafia gon’ Bills Mafia. No harm, no foul, right? Ehhhhhhhh not the case. Michael Abdallah, the man who threw a flesh stick on the field Monday night, has had a shitty couple of days.

According to WKBW in Buffalo, the 34-year-old was identified through eyewitness accounts and surveillance video footage. He was subsequently arrested and charged him with disorderly conduct.

Abdallah, who lives in Florida, appeared in Orchard Park Town Court on Tuesday rocking an orange state-issued jumpsuit after spending a night in the Erie County Holding Center. Abdallah pleaded not guilty to a disorderly conduct charge, with bail set at $250 cash or $1,000 bond. He is due back in court on Decemeber 4th, but he does not need to return if he hires an attorney, which will cost him a pretty penny.

Below is Abdallah in his orange jumpsuit trying to make his way home to Florida without serving any more time in a cell. Dude is GOING THROUGH IT.

Michael Abdallah is the man who threw an object onto the field during last nights Bills game. He is trying to make his way back to FLA where he lives without serving more jail time pic.twitter.com/laSrVg94Pt

The real kicker here is that this dude has had to miss two days of work and everyone knows why. On top of spending a night in the click, Mike may have to pay his lawyer in IOUs considering he may not have a job when he gets home.