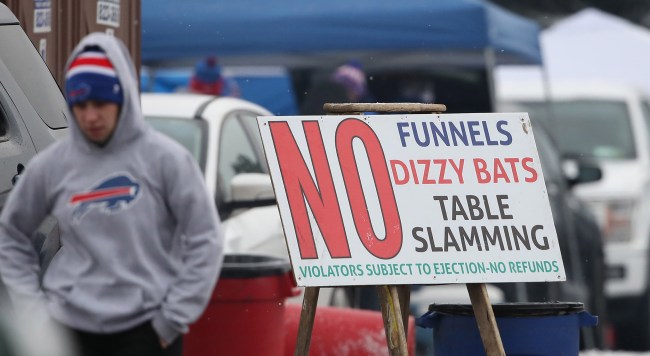 For some reason Buffalo Bills management is still not down with the antics of the Bills Mafia.

Apparently they aren’t big fans of people being slammed through tables (even newborn babies), killing Santa, beating actual Jets with a sledgehammer, and public BJs in their parking lots. Go figure.

Last September, it was reported that the Bills and the Erie County Sheriff’s Office had outlawed table-slamming at Bills games, and were going to crack down on “eliminating excessive alcohol consumption.”

Of course, it didn’t work.

So, for the 2019 NFL season, Buffalo brass have announced a new policy that requires fans who arrive in buses to purchase a tailgating package along with their parking pass, reports the Buffalo News.

Buses and/or limo buses that do not wish to have their guests tailgate will have to pay $100 for a parking pass, but are not required to purchase a tailgate package. By instituting the new policy, Bills officials hope to curb some of the unruly behavior inside the bus lot.

“Our No. 1 concern as an organization is fan safety,” said Andy Major, the team’s vice president of operations and guest experience. “When you’re seeing what was happening in the bus lot the last couple seasons, especially last year, it gets very concerning.

“It’s dangerous behavior, not just negative fan behavior. It’s dangerous to security, the sheriffs and staff who are trying to police things.”

Should fans decide to pay what is essentially a tailgating tax, they will receive a spot in what the team is calling “Tailgate Village.”

This “village” will be operated by Tailgate Guys, a company that specializes in customizing tailgate parties. Included in each package is a tent, tables and chairs, plus fans can customize their packages with additional tables and chairs, grills, televisions and catering options, including beverages.

“The viral videos on social media, it’s embarrassing when we see that,” Major said. “It affects the community, affects the team negatively. We know our fans aren’t like that. That’s what’s disappointing for us.

“We know we have great fans. We know the vast majority of our fans, they do behave well. They’re passionate, they’re loyal and they’re not causing issues, but there are a few who make a big stink out there – a few knuckleheads who wreck it.”

Good luck with slowing down the Mafia, Buffalo. Something tells me they will still find a way.