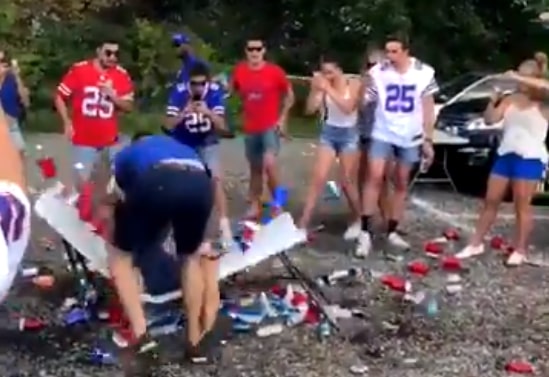 Much like the Spartans are forced to battle one another at young ages to prepare for future skirmishes against Athenians, Bills fans prove their fortitude by catapulting their bodies into tables in an attempt to obliterate them. However, the time-honored tradition of table slamming by Bills Mafia is now outlawed.

The Erie County Sheriff’s Office announced that table slamming has been banned at Buffalo Bills games. Those caught table smashing will be ejected and could face criminal charges. That’s like telling ancient Genghis Khan-era Mongols that they are prohibited from using horse-mounted archers in skirmishes. This is the Bills Mafia, obliterating plastic folding tables is in their blood, it’s what they were born to do.

It somehow gets worse. The fun police will also be cracking down on getting shitfaced at football games.

“A reminder from the Sheriff’s Office, they will be focusing on eliminating excessive alcohol consumption and checking for glass bottles. Fans and tailgaters are reminded that the Fan Code of Conduct, extends to the parking lots. The Sheriff’s Office has stated that table slamming is not permitted and violators will be ejected and could face criminal charges.”

“Despite some of the viral videos and social media posts you’ll see, our fans in general are very good, and they are very responsible and have a good time,” Bills vice president of operations and guest experience Andy Major said. “But we want to make sure that everyone understands that we’re going to hold those folks accountable — the [small] minority of fans that do some of those things out there in the community and on game day that we feel are unsafe — we are going to take care of that with our [security] teams.”

I’m sorry, I thought this was America.

Even former NFL player Shawne Merriman had to cancel his pregame event that probably would have had some sweet table slamming action.

“Out of respect of the @BuffaloBills & the safety of fans. I won’t be hosting an event in the parking lot. Buffalo fans hold a special place with me, I’m looking forward to a great game between my two former teams. You can still catch me in action Nov. 9th for my fight @WBKFF

Just like American patriots didn’t let the British tell them what they could and couldn’t do in the 1700s, the Bills Mafia isn’t about to stop doing what they love. There were several brave Bills fans who put these new regulations on the Pay No Mind List and table slammed for freedom before today’s home game against the Los Angeles Chargers. Molon labe.

They may take away our tables, but they’ll never take our freedom!