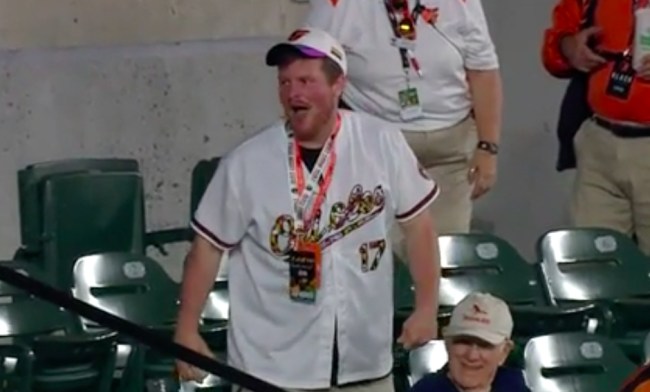 If certain statistics are to be believed, your average baseball fan has about a one in 570 chance to catch a baseball at a game (although the odds obviously vary depending on where you’re sitting and how many people are in attendance).

I grew up a short drive away from a minor league baseball stadium and can’t count the number of times I rolled up to the field with my glove in tow in the hopes of taking home a souvenir that never came.

When you reach a certain point in life—usually around the age you get too old to go out on Halloween—you have to come to terms with the fact that you’re “that guy” if you bring a glove with you to a baseball game. However, that doesn’t mean your dreams have to die.

Baseball is a sport built on unwritten rules for both players and fans alike and one of those unspoken commandments is that if you manage to snag a ball as an adult, your sworn duty is to hand it off to a kid in your general vicinity.

However, on Wednesday night, a Baltimore Orioles fan decided to say “Fuck that noise” when he fended off a couple of kids who were also in pursuit of a ball that landed in the stands.

Orioles fan steals a ball from a little kid and says "I know it's terrible but I've been coming here for 30 years!" pic.twitter.com/qa8tWi509W

The guy in question decided to hold onto the ball as opposed to giving it away, and while he appeared to know he had violated The Code, he came to his own defense by saying he’s been coming to Camden Yards for the past three decades.

I’m sure there are plenty of people out there who would like to see this guy get karmically plunked for his actions but I would have done the exact same situation.

If I had to say something to the kids who missed out, I’d do so by paraphrasing Ben Stiller in Heavyweights: You didn’t get the baseball due to lack of hustle. Deal with it.