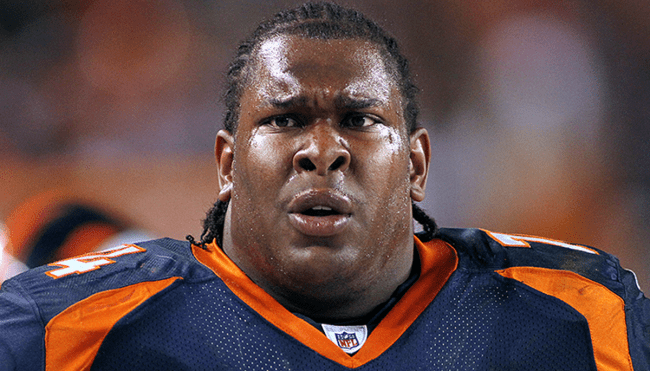 As someone who is frequently described as “freakishly tall,” I’m used to seeing people stop on the sidewalk and do a double take after spotting me, and in a world where I dwarf the vast majority of the population, I only need one hand to count the number of occasions where I’ve understood how other people feel when they encounter an abnormally large person in public.

One of those moments unfolded shortly after I arrived on campus for my freshman year of college. I vividly remember walking to class one day before literally stopping in my tracks after spotting an impossibly big dude who I soon realized was a lineman on the football team. While I may have had a few inches on him, he had at least a hundred pounds on me, which gave me a new appreciation for just how enormous the guys in the trenches have to be.

That’s especially true if you want to make it in the NFL, and last year, a number of former linemen spoke with ESPN to shed light on the grueling diet and exercise regimen they had to follow in order to stick around in the league. That group included Joe Thomas, who was rocking 310 pounds on his 6’6″ frame when he retired in 2017.

Thomas told the outlet he needed to deprogram his brain to learn how to eat like a normal person as opposed to someone who couldn’t go more than two hours without chowing down on something, and once he managed to do that, he underwent a dramatic weight loss transformation that left him looking like an entirely new man.

Use the Retweet button as a round of applause for @joethomas73 incredible transformation. pic.twitter.com/JkquDuRRN4

He’s far from the only former lineman with a similar story, and now, we can add a new NFL alum to those ranks courtesy of Orlando Franklin, who was drafted by the Broncos following his time at the University of Miami and bounced around the league before ultimately announcing his retirement in 2018.

On Tuesday, Franklin showed off the progress he’s made when he posted a picture of himself from his rookie year next to a recent photo that captures just how far he’s come since dropping close to 90 pounds over the past few years.

Props to Franklin for going from the bouncer at the club tasked with pounding on the bathroom door and yelling “You better show me some Nasonex when you come out!” when someone takes too long to the Cool IT Guy who will turn off the internet filters on your work computer in exchange for a six-pack.