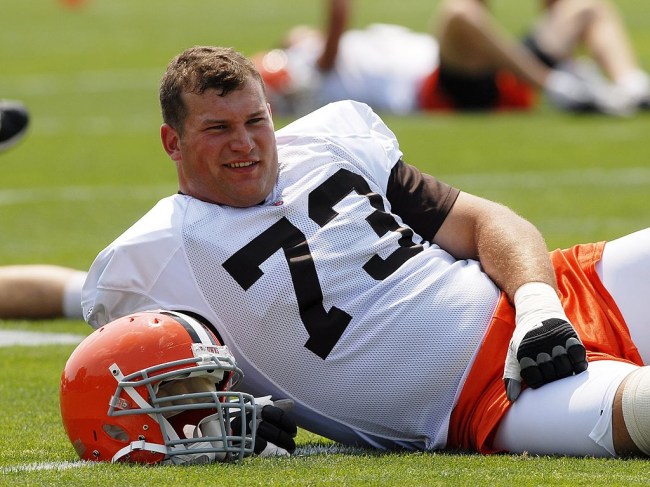 “Fans know me more for losing weight than they do for anything I did in my entire career.”

That quote comes courtesy of offensive tackle Jordan Gross, who played 11 seasons with the Carolina Panthers before retiring in 2014. He shared that thought with ESPN, which conducted interviews with nine former NFL linemen about life after football. When I first read it, I found it impressively depressing, but after digging a little deeper, I found it was actually strangely inspiring.

Making a living as an NFL lineman is inherently insane, as you have to constantly eat an absurdly large amount of food in the name of job security. If you’ve ever tried eating a 5,000 calorie lunch, you know that it’s certainly no small feat,  but if you’ve been consistently eating 5,000 calorie lunches every day for over a decade, it’s harder than you thing to suddenly find yourself switching to a normal life and the diet that comes with it.

Gross somehow managed to radically alter his food intake and lifestyle to become a healthy, non-football playing person, and while many of the other guys at his position end up doing the same, anyone who’s tried to lose weight knows it’s not as easy as just telling yourself to eat less food—especially if you’ve conditioned yourself to consume as much as you possibly can.

Joe Thomas looks like an entirely different person compared to his appearance during his time on the Browns but the transformation basically required him to reboot his brain, as he said:

“You’re training yourself to have an eating disorder the way you view food when you’re in the NFL and to try to deprogram that is a real challenge… If I went two hours without eating, I literally would have cut your arm off and started eating it.”

These guys are essentially forced to be at least 300 pounds, because if you lose a solid chunk of weight, you can also risk losing your job. Many of these players are told their worth can practically be measured in calories and weight, which is an excellent recipe for creating body image and self-esteem issues, which is something former Falcon and Buccaneer Joe Hawley says he constantly struggled with:

“I always had this insecurity of being big when it came to dating life; talking to women and going out being a 300-pound man. I didn’t want to be that big, but I had to because I loved football and that was my job.”

It’s straight-up not normal to be this big. That’s not fat-shaming. That’s reality. It is not healthy to force giant meals down your throat every two hours for the sake of your job. But that’s what the life of a lineman is like.

One of the wildest discoveries to me is how Thomas says he had to essentially rewire his brain to not eat when he was full. When playing in Cleveland, he had to be constantly chowing down. The man probably hadn’t felt an ounce of hunger since he entered the league when he retired. I have a habit of eating ice cream every night and it would take a whole lot for me to stop that, so I can hardly imagine how tough it was for Thomas.

The worst part? There’s not much glory in being a lineman. Headlines are always about the quarterbacks, receivers, and running backs. Occasionally, cornerbacks, safeties, tight ends get some time in the spotlight. But linemen? Not so much. At least they’re finally getting some attention here.