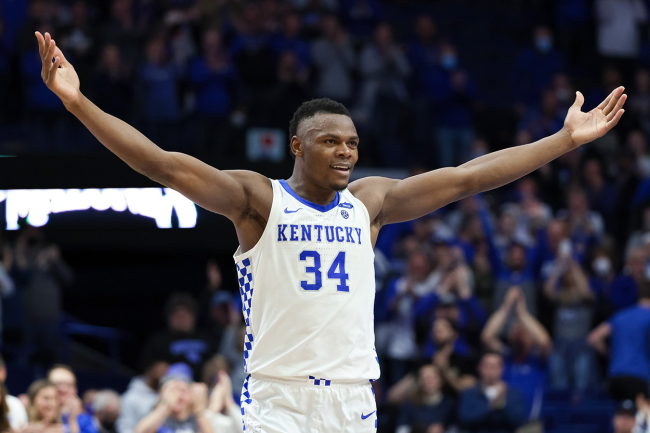 Oscar Tshiebwe is arguably the most dominant player in college basketball. The 22-year-old center spent his first three years at West Virginia before transferring to Kentucky and making a huge impact.

Despite the weight that his name carries in the college basketball space, he was not able to profit from his Name, Image and Likeness until earlier this week. Tshiebwe, born in the Democratic Republic of the Congo, only moved to the United States in 2015.

As a result, he has been attending an American university on an F1 student visa — which does not allow him to have a job. That has made things very complicated in terms of NIL.

However, over the weekend, Tshiebwe announced that he is open for business.

Excited to announce I am open for business BBN. I am happy to join @TheFamilie_. For all business inquiries please contact oscar@thefamilie.com 🙏 pic.twitter.com/m1vtW7ulyx

As one of the most marketable players in the sport, it’s a huge deal.

According to a recent profile by The Athletic’s Kyle Tucker, the influx of NIL offers have been pouring in.

“Within 45 minutes, his agent, Nate Conley at The Familie, had 36 email inquiries. By the time Conley woke up Monday, there were 192 more. During a 25-minute conversation with The Athletic around lunchtime the same day, another 22 messages flooded Conley’s inbox, all with similar subject lines Oscar NIL. Oscar availability?”

Tshiebwe has been working with his agent, his immigration lawyer and the Kentucky coaching and compliance staffs to figure out how to navigate the complexities of his NIL situation. Over the weekend, although there are still limitations, they got it figured out.

Per The Athletic, “there are already six-figure offers rolling in, plus a giant pile of smaller deals that add up to a significant number. Tshiebwe is about to get a free Porsche, like teammates TyTy Washington and Shaedon Sharpe, and launch a merchandise and apparel deal.”

There are also two huge factors at play.

Even though Tshiebwe is tearing up his NCAA opponents, he isn’t considered a top NBA Draft pick— yet.

He is expected to declare for the NBA anyway, in large part due to financial need. His mother still lives in the D.R.C. and he would love to bring her to the United States.

Well, NIL may allow that to happen and may also keep him at Kentucky for another season.

The Athletic reported that Tshiebwe’s agent received an email in regard to him returning for the 2022/23 season. Should the 6-foot-9, 255-pounder stay with the Wildcats for one more year, there will be a “multimillion-dollar deal on the table.”

That is huge by itself. But it gets even better for Tshiebwe, who left behind his family in the D.R.C. more than six years ago and only returned for the first time last summer.

“His father died when he was a boy, and his mother, he discovered during their reunion in June, now lives with 10 other people in a home about the size of two dorm rooms in the Kentucky players’ lodge. He’s been desperate to get her out of there — and with him in the United States — ever since. John Calipari and Kentucky have been hell-bent on helping him do that.”

Now, that dream may become a reality in the near future.

“Every conversation we’ve had — me, Cal, Nate, everybody — it’s been about how we can get this done so Oscar can help his mom,” said T.J. Beisner, who oversees all things NIL for UK basketball, to The Athletic. “The urgency hasn’t been about getting him a cool car or new clothes, although he certainly deserves those things. It was about creating an avenue to take care of his family and help people back home.”

To that extent, Tshiebwe revealed to The Athletic on Monday that a plan is in motion to get his mother to the United States in time to watch him and Kentucky play in the NCAA Tournament. And it wouldn’t be possible without NIL.

The details of how agents, lawyers and Kentucky’s staffs worked tirelessly to get Tshiebwe eligible for NIL opportunities are remarkable. They can be found in The Athletic’s full feature, which is well worth the read.