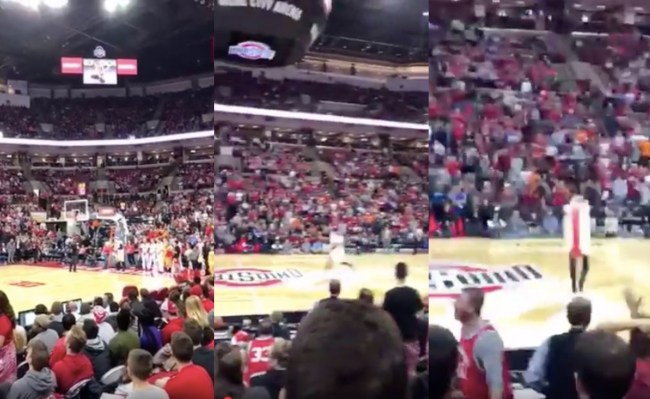 The Ohio State Men’s Basketball team hosted Syracuse earlier in the week as part of the ACC/Big Ten Challenge. The Buckeyes are currently ranked 16th in the AP and Coaches poll. They’re somehow ranked #1 in the new bullshit metric the NCAA is using to replace RPI. But Ohio State is sure to drop some in the rankings after falling to unranked Syracuse at home 72-62.

At halftime, on Ohio State fan was brought up to participate in a half-court shooting contest. The dude was wearing a hot dog costume and he was shooting for a year’s supply of hot dogs.

For The Win describes this as the ‘lamest prize‘ but I personally believe a year’s supply of hot dogs is quite possibly the best half-court prize I’ve seen in forever. Who doesn’t love hot dogs?!

The shooters roommate had his camera rolling as the guy stepped up on the other side of the court to take his shot (while wearing a hot dog costume) and he captured the guy throw a pickup line on the girl running the contest before draining the shot and setting the arena on fire. The student, Robbie Jamison, can be heard saying “Most people call me Robbie, but you can call me anytime” before making it rain from half-court.

On the one hand, I think this was a great move. He saw his chance to shoot his shot and shooters are going to shoot. On the other hand, if I’m that kid’s coach I want his head in the game. First, you hit the shot. Then, you ask out the prom queen. Those are the order of operations.

I actually think this would’ve been infinitely better if he dropped that pickup line and then airballed the shot like 15-feet short and fell on his face as a joke. That would’ve been PERFECT internet content.