OSU’s Julian Fleming Has That Dawg In Him, Catching 2 TDs In Scrimmage After Popping A Dislocated Shoulder Back Into Place 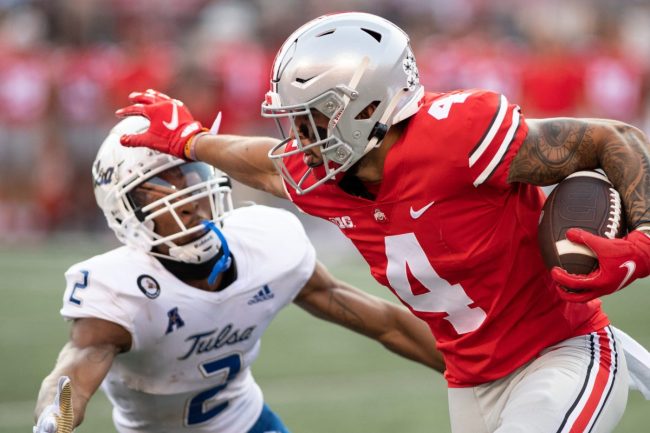 Julian Fleming has got to be one of the toughest players in college football. The Ohio State wideout has battled through injuries over his career in Columbus.

But he keeps coming back for more.

The pass catcher hauled in 12 catches for 86 yards last season, missing out on playing time as the Buckeyes still had Chris Olave and Garrett Wilson on the roster. With those two first-round picks now playing in the NFL, Fleming will have his time to shine.

The rising junior gave fans a glimpse of what’s to come with a five-catch performance in Ohio State’s Rose Bowl win over Utah last year. Now, he’ll look to stay healthy and build upon that performance this fall.

With preseason winding down, and the regular season just a week away, Fleming is showing coaches that he wants to be on the field.

In a Saturday scrimmage, the Buckeyes’ receiver reportedly dislocated his shoulder. Rather than packing it in and calling it a day, he popped it back in and went on to catch a pair of touchdowns.

Seeing that Fleming is likely to see a ton of action this year, it’s not something he needed to do. But he appears to be on a mission, and Ohio State fans can’t help but appreciate the drive.

OSU fans were quick to respond to seeing Julian Fleming’s toughness on full display. It’s safe to say they’re excited to see what the wideout can accomplish on the field this year.

he’s got that dawg in him

Fleming is a tough kid. Can’t wait to see all his hard work pay off

Hopefully, Fleming will stay healthy in the 2022 season and show the nation his potential. His Buckeyes will be looking for a national championship this year, and he should have a major impact in that journey.