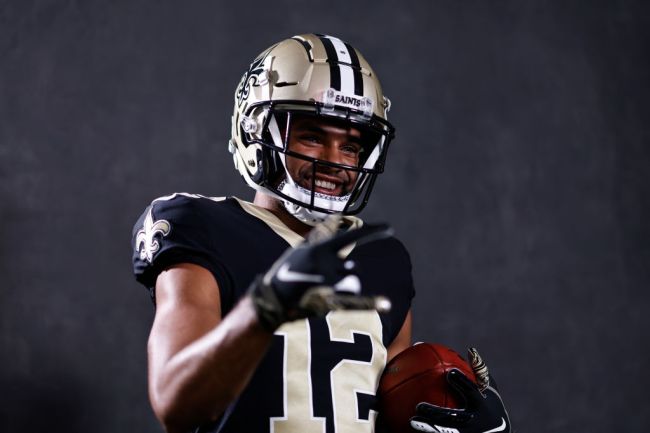 The New Orleans Saints have spent years looking for a receiver who could give them another threat to line up across from Michael Thomas. The team’s receiving corps has gone through changes year after year since they traded Brandin Cooks to find a true number 2 option for the team. That may end this season.

The Saints drafted Chris Olave early in the first round of this year’s NFL Draft and his camp highlights have quickly made that seem like a decision that will benefit their offense in a big way.

During a drill, Chris Olave was lined up against veteran Saints cornerback, C.J. Gardner-Johnson. The ball was thrown to Olave as he reached the end zone and he went up over Gardner-Johnson to make an awesome grab.

“That’s alright Chauncey, the rookie got you.”

Chris Olave rose UP for this catch over C.J. Gardner-Johnson 😨

After 3 productive seasons at Ohio State, the Saints traded up twice to make sure that they didn’t miss out on Olave, taking him 11th overall in this year’s draft. This highlight is a good example of why they were so enamored with Olave in this draft class.

Olave joins a completely revamped group of pass catchers for the New Orleans Saints. After going through the 2021 season with a disappointing group of receivers, the Saints went out and signed Jarvis Landry.

Then they drafted Olave and they’ve since gotten back a healthy Michael Thomas in training camp, who is reportedly looking like the dominant receiver he was before injuring his ankle.

With Jameis Winston back from the knee injury that cost him most of last season and a revamped receiving corps, the Saints are going to once again be an offense to watch in the NFL.