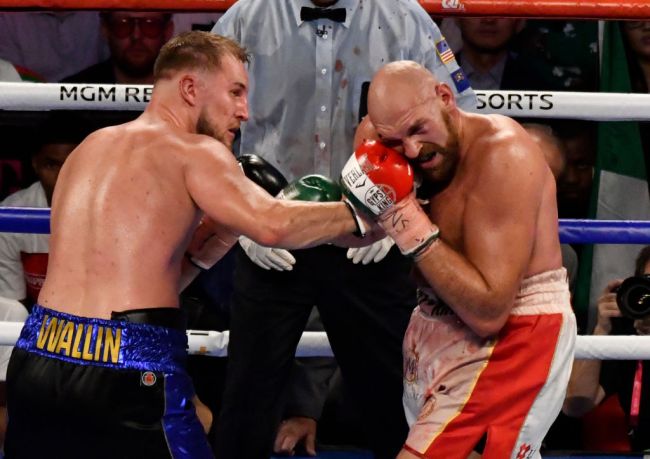 Swedish heavyweight boxer Otto Wallin, who almost took down Tyson Fury back in 2019, is set to face top-ranked heavyweight Dillian Whyte in the UK on October 30th live on DAZN. Wallin/Whyte is one of the three huge heavyweight matchups to take place within the next month alongside Usyk/Joshua and Wilde/Fury 3.

Before his fight we were able to sit down with Wallin to talk about how he feels he matches up with Whyte, his thoughts on the upcoming Usyk/Joshua Wilder/Fury fights set to take place in the next few weeks, his views on the celebrity boxing craze, and why he feels he could beat Tyson Fury in a rematch.

Wallin on fight with Dillian Whyte.

“He’s a good fighter, he’s highly ranked, he’s been in a lot of wars, I feel like he’s aging a little bit, I think you could see that in the Povetkin fight, I think I’m a smart fighter, I’m fast and I got good defense and good offense, so I think that my style, I don’t think he’s ever fought any southpaws before, maybe early on in his career but no one significant, so I think that would be an advantage for me, that I’m a southpaw”

“I would favor Joshua to win and maybe stop him late but I think Usyk, he’s good so he can definitely come up with some problems for Joshua, we’ll see what happens it’s going to be interesting.”

“I think that he’s (Fury) pretty much figured him out, I think Wilder is very dangerous with his one punch but he can’t just rely on that, he has to let his hands go and not load up so much because Fury has good defense and if he’s gonna load up that’s going to make it easier for him. We’ll see how much Wilder has learned, he’s come up with a lot of excuses and stuff, so it’ll be interesting to see if he’s learned anything”

On celebrity boxing craze taking over the sport.

On potential rematch with Tyson Fury

I think a lot would be different, I had only fought one round in 18 months, I had three fights get cancelled that year, he was my first fight in that big stage, I think that I’m more experienced now, I think I’ve learned a lot since then, and I keep learning all the time, so there’s a lot of things that I can do better, I already know that I would better