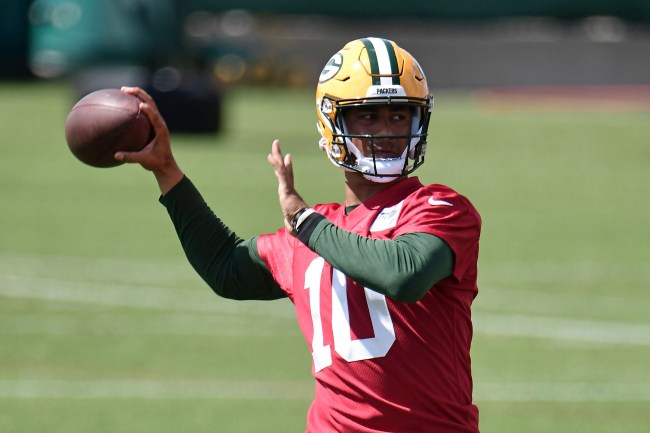 On Tuesday, Love struggled on the field which led to many Packers fans to freak out considering Aaron Rodgers continues to be adamant about wanting to get traded by the team.

Notes from Minicamp practice No. 1

* Davante Adams was present but did very little.

* Jaire Alexander with a big PBU (what else is new).

Less than 24 hours later and Packers beat reporters were gushing over Love’s latest performance at practice.

On Wednesday, several writers noted how much better Love looked as he took a majority of the snaps.

Jordan Love with a beautiful deep ball down the right sideline in 11-on-11s to AJ Dillon, who reels it in on the run. Love pumps his fist a couple times and gets shoulder bumps from OC Nathaniel Hackett and TEs Coach Justin Outten.

Jordan Love with his fourth dime of practice. An absolutely perfect throw in tight coverage to Aaron Jones down the right sideline. Impressive catch by Jones and Love is now getting fanned off by coaches because he’s on fire.

What a stretch for Jordan Love:

* Deep sideline to Aaron Jones for 30.

He was so 🔥 that TE coach Justin Outten started fanning him.

Love later ended 2:00 with a TD to Allen Lazard. This is the journey of a young QB. Yesterday, when Love struggled with accuracy, is part of it, too. It’s shorts and helmets in June. But today was the best I’ve seen him be. He should feel great about how he answered the bell. https://t.co/ZJ39EEFlWM

After his impressive practice session Love stated that he’s ready to be the Packers’ starting QB on week 1.

Jordan Love on if he's ready to be the Week 1 starter if it got to that point: "100%. This is a time where I'm getting a lot of extremely valuable reps that I might not have gotten in normal circumstances. … I was drafted here to play QB so I’ll definitely be ready Week 1." pic.twitter.com/7uedTIEdfj

“This is a time where I’m getting a lot of extremely valuable reps that I might not have gotten in normal circumstances. … I was drafted here to play QB so I’ll definitely be ready Week 1.”