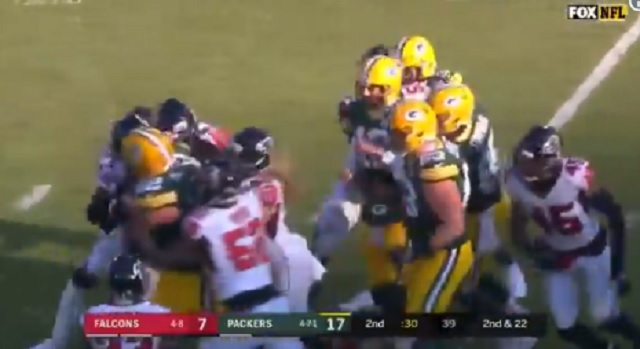 A fight broke out between Packers players and Falcons players right before the half.

With 15 seconds left in the second quarter Falcons defender Brian Poole delivered a big hit on a sliding Aaron Rodgers which led to the brawl on the field between the two teams.

Big brawl after ATL's Brian Poole appeared to hit a sliding Aaron Rodgers in the head.

Big melee after Brian Poole slammed Rodgers with his shoulder on a QB scramble up the middle. Lucas Patrick goes after Poole, and Deion Jones jumps on Lucas Patrick. Flags everywhere. Players have to be separated. Offsetting penalties and the 22-yard scramble stands. #Packers

Fans on Twitter debated whether Poole’s hit was clean or not.

Lmao Brian Poole did nothing wrong man y’all move along

That being said I’m glad the O line stuck up for their QB.#GoPackGo

Lucas Patrick was having none of that cheap stuff on Aaron Rodgers. A cheap hit from Brian Poole high as Rodgers was sliding, and Patrick goes right after him. Penalties flags fly. Surprising, not a penalty on the hit.

That’s a clean hit by Brian Poole though

That's a perfectly legal play by Brian Poole. Not his fault Rodgers slid down late. The protection quarterbacks get is so ridiculous these days. #ATLvsGB