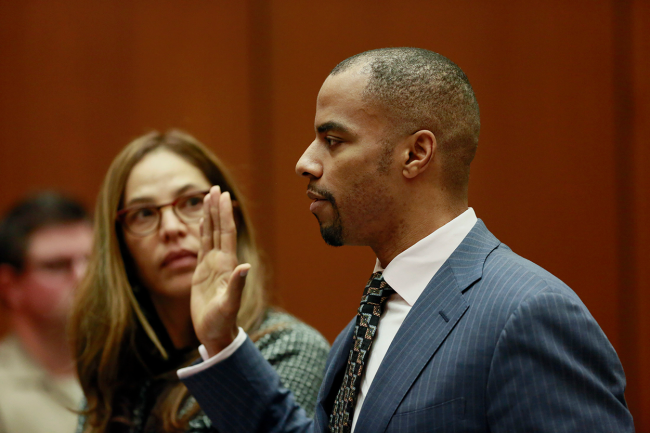 Darren Sharper may be one of the greatest safeties in NFL history, but he is also a terrible human being. When it comes to remembering the 14-year NFL veteran, the latter far outweighs the former. He should not be remembered for his NFL career, but for what happened after.

Although Sharper should not be remembered in a positive light, it seems as though one Packers fan either forgot, didn’t know, or chose to proceed as if Sharper was only an NFL great, and not also a horrible person. The fan showed up to Green Bay’s training camp on Wednesday wearing a No. 42 jersey with Sharper’s last name brandished on the back.

… choices were made by this man pic.twitter.com/oxKCcdOEvS

If you don’t remember why this man should definitely not be wearing Sharper’s jersey, it is because he is currently in prison after pleading guilty to rape and drug-related charges. He is an awful person.

On November 29, 2016, Sharper was sentenced to a 20 years in prison after pleading guilty to drugging and raping women as many as 16 women in four different states. Some of the testimonies are truly gut-wrenching.

“I started vomiting, my head was pounding and I had trouble seeing clearly,” said one victim, who said that her rape was “the worst night of my life.”

“The only good thing about this situation is that this disgusting low-life human will be sent to prison for many years and is likely he will never be able to do to this to another woman again,” she said. “I hope this scumbag will now feel as worthless as he has made me feel.”

Sharper will have to serve at least half of his sentence before being eligible for probation. Whether it is granted or not, he is currently in prison for drugging and raping women.

“I don’t think Mr. Sharper has really wrapped his head around the fact that he is a serial rapist,” said Assistant U.S. Attorney Michael McMahon in 2016.

And now there is a fan in Green Bay wearing Sharper’s jersey at practice. Time to throw it away or burn it. Not a good look.