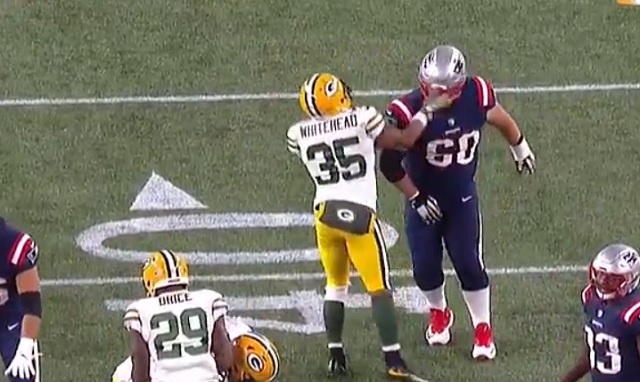 Jermaine Whitehead was ejected for this…🤔 pic.twitter.com/8A79wKpNId

Sunday Night Football Chris Collinsworth questioned whether Whitehead should have been ejected as did most people on the Internet.

That was a weak ass ejection

The Whitehead ejection is what is wrong with the NFL. Over react to the small stuff but a clear targeting call where they are looking to hurt someone is 15 yards. Think Adams getting taken out last year compared to Whitehead. smh #GoPackGo

It’s getting ridiculous to watch how much the Patriots are favored by the refs. They’re the least penalized team in the NFL… BECAUSE THE REFS WONT CALL IT WHEN THE PLAYERS COMMIT A PENALTY.

Gronk drops an elbow into Tre whites head and no ejection. Someone open hand shoves a patriots player in the head and ejection. The NFL and the refs continue to ride the patriots #NEvsGB