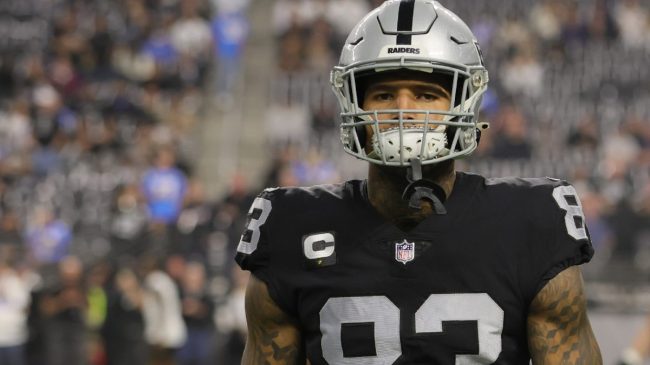 The Green Bay Packers lost maybe the NFL’s top wide receiver over the offseason when Davante Adams opted to head out west to play in Las Vegas.

A new report, though, hints that the Pack may get a nice return from the team that stole their talented pass catcher away.

Rumors are swirling surrounding a potential trade between the Raiders and Packers for tight end Darren Waller. It has been mentioned that Waller was actually targeted by Green Bay earlier this offseason, but due to his franchise tag with Vegas, he was not able to be included in a trade.

He was meant to be a part of the package in that Davante Adams deal, with the Packers landing the tight end and the No. 22 pick in the upcoming draft. Instead, Green Bay replaced Waller with a second-round selection after the NFL shut down the originally proposed trade.

Now, the team has a second chance to get their guy.

After not being able to get it done in the Davante Adams deal due to league rules- the Packers are continuing to pursue a trade for Raiders star TE Darren Waller, sources tell @AaronNagler via @cheeseheadtv pic.twitter.com/bPbwLolsKt

Adding Waller to the offense would give Aaron Rodgers arguably the best tight end he’s ever had. The pass catcher has racked up two 1,100-yard seasons since 2019 while recording a 107-catch season in 2020. He was injured for a portion of the 2021 season but still helped the Raider reach the NFL Playoffs.

With the news breaking of the interest in Waller, fans from both sides are voicing their opinion on a potential trade.

Green Bay fans are ecstatic with the possibility of landing another veteran pass catcher to the offense. After losing Adams, the team is looking for that go-to guy as they try to get back to the postseason.

#Packers targeting Darren Waller as @AaronNagler reported, makes a ton of sense for the team. That duo will be scary

If a waller trade does go down I just— pic.twitter.com/740kDOitBD

That’s a lot of size & speed on the field at one time.

Rodgers/ Waller would be nasty 😷

Raiders fans, on the other hand, aren’t as happy about the rumors. They view this as a step back when they’ve worked all offseason to improve upon last year’s NFL Playoff appearance.

If raiders trade Waller I will lose my fkn shit.

Trading Waller is a backwards step. No interest in trading for picks aka unproven talent.

Plus don't we have like 20+ mil freeing up in June? What's the idea here?

Talks appear to be moving quickly as there could be a deal in place by NFL Draft time on Thursday. If this does go through, it will be a huge pick up for the Packers.