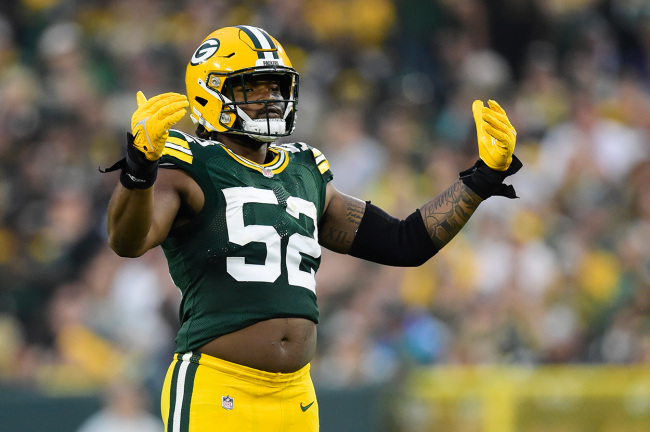 Rashan Gary became the third player to be named the No. 1 overall recruit in the country by all four major recruiting networks in the Class of 2016. He has been wreaking havoc on opposing quarterbacks ever since.

After a dominant three-year career with the Michigan Wolverines, Gary was drafted No. 12 overall by the Green Back Packers in the 2019 NFL Draft. He played primarily at the defensive end position in college but moved to the outside linebacker spot on the next level.

In his first two years in the league, Gary played a rotational role as he got acclimated to his new position but was one of the most disruptive defenders in football. Last season, that was set to be the case once again until teammate Za’Darius Smith suffered a regular season-ending injury.

During his first year as a starter, Gary led the league in quarterback pressures through Week 12 of the season and finished with a career-high 9.5 sacks and 81 pressures. He recorded 42 total tackles and forced two fumbles.

Now, with Smith signing a three-year, $42 million contract with the Vikings, Gary is set to start again in 2022. The 6-foot-5, 277-pounder has been working with pass rush specialist Brandon Jordan, who was recently hired to join Michigan State’s defensive staff.

Rashan Gary’s offseason workouts make him look poised to dominate with the Packers this fall.

Jordan, though coaching for one of Gary’s college rivals, is known for his ability to work with pass rushers on their footwork, hands and hips. That’s what they’ve been up to all season— they aren’t trying to be sexy, they’re trying to get paid.

Finishing the Day crafting the Hands! Working on the weekends when everybody else resting! @man_dammn @RashanAGary pic.twitter.com/zYcabtKef5

And it looks like he took his footwork, burst and speed to another level.

Gary is coming off of a career year in 2021 and is poised for a real breakout season on the NFL in 2022. He has always been destined for greatness and this year is the year to really turn up.