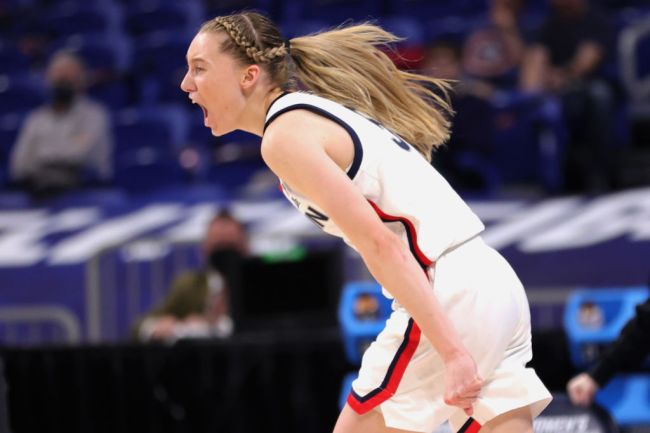 Caitlin Clark and Paige Bueckers faced off in the Sweet 16 on Saturday and the result didn’t disappoint. The nation’s top-two leading scorers, both freshman, played each other in the national spotlight and everyone was excited to see them go off.

GMs are gonna trade anything for 2024 wnba first-round picks pic.twitter.com/5BIiIqbEmI

They both had solid games, as Clark dropped a team-high 21 points and Bueckers finished one rebound and two assists short of a triple-double. However, it was the other Huskies who stole the show. Christyn Williams went for a game-high 27, Evina Westbrook came one rebound short of her own triple-double, and Aaliyah Edwards matched Bueckers with 18 points on 9-of-11 shooting.

🗣 Christyn Williams is a certified bucket

Evina Westbrook leads all scorers with 8 as @UConnWBB has a 22-18 lead at the end of the 1st!#ncaaW pic.twitter.com/rNySrJ95JG

The Freshman is up to 16 points! pic.twitter.com/A3d7GIbuZz

Clark and Iowa simply couldn’t simply couldn’t keep up with the nation’s top team and UConn rolled to a 92-72 win to advance to the Elite Eight. Bueckers may be one of the NCAA’s most polarizing players, but she’s actually a pass-first point guard and doesn’t mind playing second fiddle. Even still, she went for 18/8/9 on her own.

After all of the hype leading to up to the game, Clark and Bueckers shared a moment of respect as the clock ticked down, with the latter giving the former a little “good game” tap.

It wasn’t her only butt tap of the night. After draining a triple late in the fourth quarter, Bueckers ran over to her sideline and got head coach Geno Auriemma while he wasn’t looking. He couldn’t believe it.

The announcers joked that Bueckers pulled off something that even Diana Taurasi, who is considered UConn’s greatest women’s basketball player of all-time, couldn’t have gotten away with. That may be true, because Taurasi has called Bueckers “the best player in basketball,” and Auriemma has loosened up just a little bit in the later half of his career. With the win, the Huskies are headed to their 15th straight Elite Eight. Remarkable.