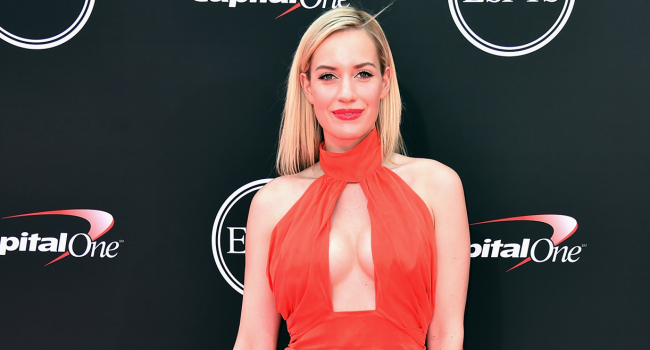 Popular golf personality Paige Spiranac is back with another viral video centered around her second favorite sport: football.

This new video, posted on Tuesday, quickly flew over the 100,000 view mark as Spiranac explains, from the comfort of a bed, why dating a “fantasy football man” is the right move.

Spiranac shares in the video that she isn’t looking for a fairy tale relationship. She wants “a man to love her the way he loves his fantasy football team.”

Check me on this after watching the video, but I think she’s being sarcastic.

For example, she points out that a “fantasy football man” knows the height, weight, eye color and family history of every single player in the league yet he claims to not know his girl’s favorite food.

Paige also says that any “fantasy football man” who says he is too busy to text back might not be telling the truth because he had the time to write a 10 page dissertation for his friends on their performance in week one.

On the plus side, a “fantasy football man” probably won’t have any commitment issues because they have been playing in the same league “for years and years.”

Monogamy, on the other hand, might be an issue since they are also playing in multiple leagues. “We’ll work on that,” she says.

Spiranac also shoots down any excuses a “fantasy football man” gives for not being able to plan dates because she has now seen what goes into planning a fantasy football draft night.

Ladies, get yourself a fantasy football man @betsperts pic.twitter.com/mcPmHf7rtv

After watching that for a second time, I am still not sure if she likes “fantasy football man” or hates him. Better watch it one more time.

Football man is nice to have but strength is always pretty important Paige pic.twitter.com/v7GY02XsxI

— This Podcast Is Making Me Thirsty Seinfeld Podcast (@ThisThirsty) September 13, 2022