Paige Spiranac Tries Playing Soccer, Without A Shirt, To Celebrate The Start Of The World Cup 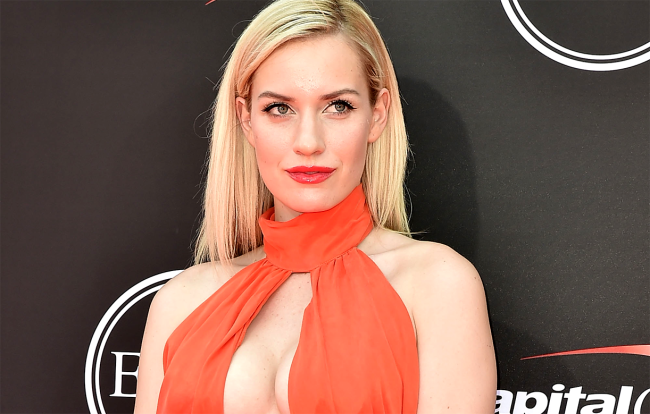 The photos she shared on Saturday are sure proof of that.

In fact, Spiranac is so into the World Cup now she’s back out on a soccer field, again not wearing a shirt for some reason (we had some thoughts on why she might be doing that), showing off some strikingly bad skills on the pitch.

“Hey everyone, it’s Paige, and the World Cup is here and I’m going to test my FIFA rating and see if I can potentially play soccer, football?” her voice rising in pitch the more she tries to explain what’s about to happen.

“Uh, probably not looking too good, but we’re going to try,” Paige said with a cute chuckle.

The camera then switches to Spiranac kicking a ball into a soccer goal with a FIFA rating of 58 for Power superimposed on to the screen.

Next, we see Paige fly by the camera in a blur, giving her a FIFA Pace rating of 99.

She then misses back to back shots on goal which somehow gives her a 84 rating in Shooting.

We don’t get to see any more attempts, but the rest of her FIFA ratings are 95 for Dribbling, 38 for Defense, and 65 for Physicality.

All of that combined and Paige Spiranac was awarded an overall FIFA rating of 81. Seems like that might be a little high.

.@PaigeSpiranac takes a shot at some futbol ⚽️

Check out her Fifa Rating pic.twitter.com/2JWNuXHJeA

Fans, as always (even those who are still struggling with her videos’ sound), had thoughts on Paige’s latest viral video.

“Running form is good but the kicking style and manner need some work – nice outfit,” another fan tweeted back at Paige.

Need a front angle of the penalty kicks...😜

“Okay now I’m interested in soccer,” someone else responded.