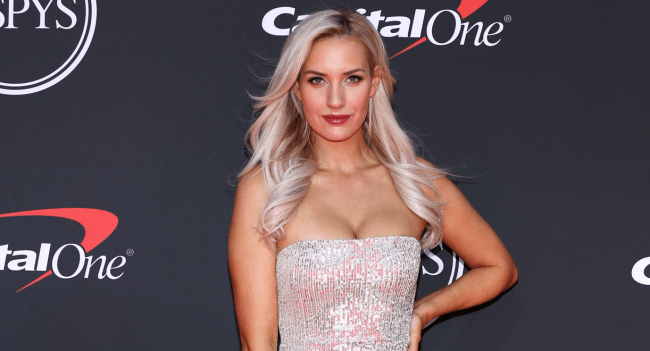 Popular golf influencer Paige Spiranac, who obviously “gets it” when it comes to understanding what her appeal is to a mass audience of men, is back with perhaps her most obvious (and funny) viral video.

Spiranac, who recently dropped the hammer on critics of female athletes “showing off their bodies” for monetary gain, receives a lot of criticism herself.

She has addressed some of those critics in the past. Recently, she put viewers who like to fat shame her on blast.

Today, however, Paige talked about one of the most common complaints she receives every single time she posts a new video.

What did you say

No audio on my end.

That’s right. Paige is finally addressing all of the comments where viewers claim to have not been able to hear what she says in her videos.

“Sorry for the sound issues. I know you guys keep saying you can’t hear me,” she writes on Twitter.

“Hey guys, so I know we’ve been having a lot of technical difficulties on my videos lately,” she begins the video.

“You’re saying that there’s just no…”

Then the audio cuts out.

Unfortunately, it goes on like this for a good 12-13 seconds before the audio is restored.

“You keep saying it goes in and out and you can’t hear it,” we finally hear her say.

“I just, I don’t know what’s going on, but I’ll work on that,” she finished with just a hint of a grin, which you will fully understand why once you watch the video.

Sorry for the sound issues. I know you guys keep saying you can’t hear me. pic.twitter.com/sBcSoUdt9P

“I’m like, pretty much a sound engineer now if you need help,” one fan wrote in response.

“Sound is fine to me,” another fan tweeted.

“Wait what just happened. I feel like Clark Griswald at the mall,” joked another.

Yes. Yes, she most certainly does.

How else do you explain the popularity of her recent video where she dumps on the USMNT World Cup shirts?

Perhaps it was because she crushed the USMNT World Cup shirt while not wearing a shirt herself?

And what about her helpful videos like when she explains golf lingo or explains baseball terminology?

There is literally nothing she can talk about in a video that will stop it from going viral.

Perhaps some day she will just do a social experiment where she posts a video of sitting there, saying nothing, just to see how many views it gets. I’d be willing to bet real money that it would easily surpass 250,000 views.