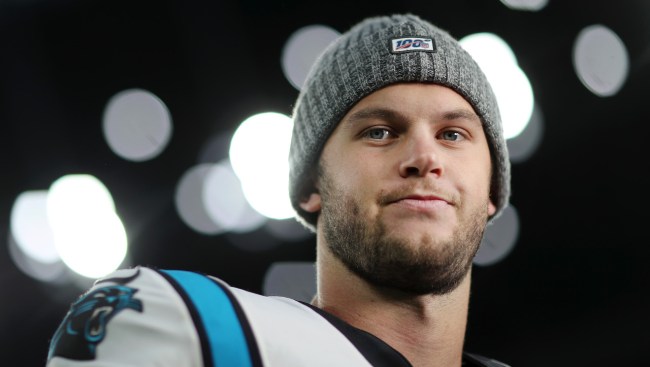 Despite starting the season 0-2, the Carolina Panthers are now looking like one of the stronger teams in the NFC, as they have won four straight games with their backup quarterback Kyle Allen as their starter.

Since taking over the starting quarterback position, the Carolina Panthers have yet to lose a game with Kyle Allen at the helm, as the second-year quarterback has passed 901 yards on a 62.5 completion percentage while throwing seven touchdowns and zero interceptions.

Now, with Cam Newton potentially set to return from injury following the Panthers Week 7 bye week, the Panthers are faced with a difficult decision: return to the former MVP and franchise QB or stick with the on-fire second-year signal-caller.

According to NFL insider reporter Ian Rapoport, the Carolina Panthers are internally deciding whether or not they are going to stick with Allen once Newton returns from his foot injury.

Here is how one Panthers source broke it down: If the team wins, the status quo reigns, as Allen likely keeps his job as Newton makes a slow and steady return to the field from his mid-foot sprain. If Carolina loses to Tampa Bay, it’s up in the air, but potentially it paves the way for Newton to return to his starting post when healthy. [NFL]

From @NFLGameDay Kickoff for the London game, the #Panthers may keep rolling with QB Kyle Allen if they keep winning, as this QB situation gets complicated: (https://t.co/sEQInhjJWq) and 👇🏼 pic.twitter.com/DyXqq7b3WY

While Cam Newton once led the Carolina Panthers to a Super Bowl appearance during an MVP season, he has clearly not been the same quarterback over the last two years due to injury. And with the Carolina Panthers looking like a much-improved football team without the former Heisman Trophy under center, it’s fair to wonder whether or not the Newton era in Charolette has come to an end.