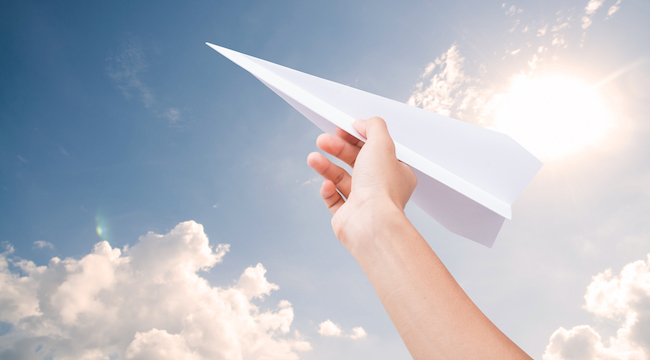 I’m far from a soccer hater, but even the most diehard fans of the sport have to admit that— at least at times— its exciting moments can be few and far between. As a result, spectators are forced to come up with ways to kill time during lulls in a match, like singing, chanting, or— if you’re in Eastern Europe— shooting flares at referees.

Fans in England, on the other hand, have come up with their own way of entertaining themselves: throwing paper airplanes onto the pitch. The phenomenon first came to my attention in 2014 when someone managed to hit a player with a plane thrown from the upper deck of the stadium:

I never thought that feat would come close to being topped, but someone at yesterday’s World Cup qualifier between England and Slovenia came pretty close:

You know England are shite when a plane landing in the net gets the biggest cheer 😂 #England #ENGSLO pic.twitter.com/cZxIfDEeaw

[Insert your favorite clip of an announcer yelling “GOOOOOOOOOOAL” here]

As you can see by the caption, the man who captured this marvelous achievement wasn’t thrilled with England’s performance, but the team was able to turn things around eventually. Harry Kane scored a goal three minutes into extra time to ensure England will have the chance to be eliminated in some heartbreaking fashion at the 2018 World Cup.