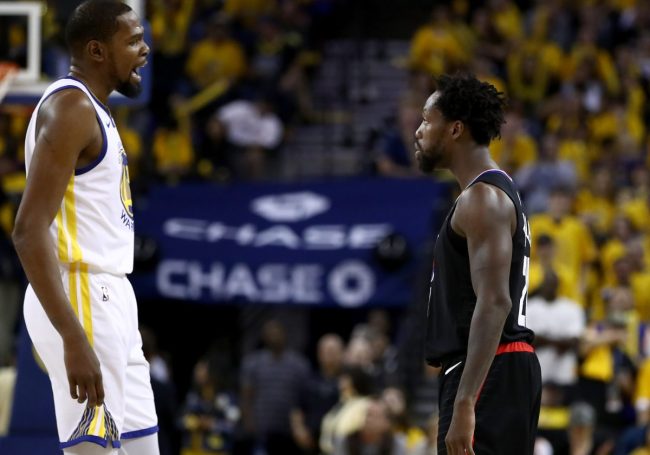 Pat Bev wasn’t too happy with KD following news Durant would be returning to the Nets after an offseason of drama.

The superstar demanded a trade from the organization earlier in the offseason, saying the team needed to choose between him or head coach Steve Nash. Brooklyn management held strong in their support of Nash, allowing Durant to seek out suitors.

When all was said and done, most teams weren’t willing to match the Nets’ asking price for the forward, leaving all trade negotiations to fall apart.

After meeting with the front office this week, news broke that KD would be returning to the Big Apple to play for the Nets in the upcoming season.

While Brooklyn fans are likely ecstatic with the return of both Durant and Kyrie Irving, there’s one NBA player that’s not too fond of how the situation was handled.

Patrick Beverley took to social media to speak on the news of the return, throwing shade at Durant.

“Yal can sit and don’t say nothing but that ain’t cool. It’s dudes with families out here who haven’t got a job because of this KD shit. And to be on and off ain’t cool. Blessing Gang.”

Beverley says that Durant’s holdout caused other players to lose out on possible opportunities. Durant drug the process out before realizing he’d have no real choice but to return, handcuffing the Nets’ front office a bit.

It didn’t take long for Durant to respond.

This will present an awkward dynamic in Brooklyn seeing that Durant called for the organization to fire the head coach, which ultimately didn’t happen. It will also make for an interesting storyline when KD and Pat Bev meet on the court next season.