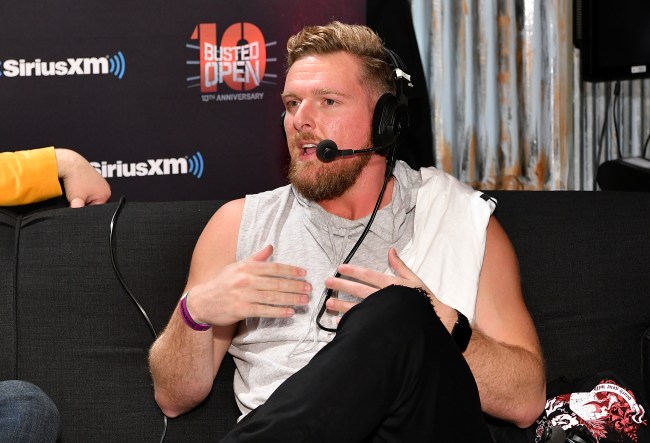 There won’t be any ESPN personalities appearing on the Pat McAfee show anytime soon.

On Friday, a frustrated McAfee revealed that he had heard through the grapevine that ESPN is banning all of their employees from appearing on his show going forward.

SHAHT AHT to all my friends that used to be able to come on the show #PatMcAfeeShowLIVE pic.twitter.com/imek79iVUl

BREAKING: Award winning Pat McAfee (@PatMcAfeeShow) will no longer be allowed to feature anybody who works for ESPN on his show, per orders given by ESPN.

Terrible decision by ESPN. Raise your hand if you agree! 🖐️

McAfee, who has done play-by-play work for ESPN and has appeared on some other their programs, appears to be done making appearances on the network.

Well now do I have to? I guess I would, I spent a million dollars traveling around the country working for that company so I guess I will never have going on to their thing again

Clarification from @diannaESPN on players asking vs demanding a trade & how it's reported..

& a very interesting nugget on Russ Wilson & the #Seahawks

"I know there's been calls made on both sides. Going to Seattle & from Seattle to other teams" #PatMcAfeeShowLIVE pic.twitter.com/dAYT2ijcZt

Sports fans were not happy about ESPN’s new mandate and got #ESPNstinks to trend on Twitter.

ESPN sees @PatMcAfeeShow as a threat. That's after that Bayless contract and story. That's why this happened. I like a lot of ppl who work there, but #ESPNstinks .

What the hell are they doin over there at ES*N??? Shoutout @AdamSchefter @JeffPassan @arielhelwani and all the other great guests from the worst sports network on the planet, you will be missed #ESPNStinks pic.twitter.com/rPE5YVuvfM

Congrats @PatMcAfeeShow and welcome to the two man club. I take it as a badge of honor. Have since day one. Also congrats on making millions annually on @YouTube and @FanDuel. That freedom outweighs everything else. Keep kicking ass.