Pat McAfee Took A Hilarious Shot At Urban Meyer After Being Criticized For…Having Too Much Fun? 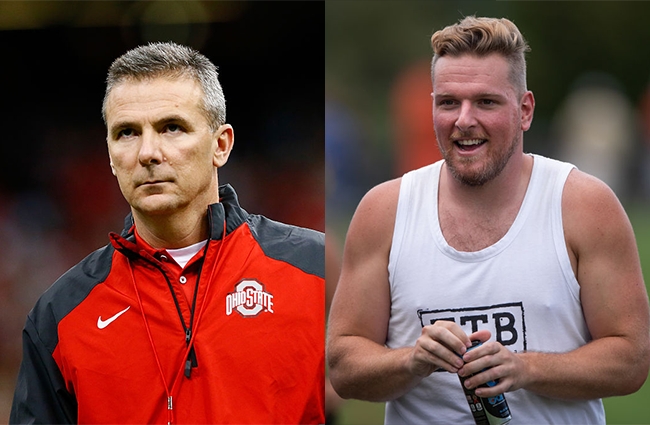 In 2017, former Colts punter and all-around Cool Dude Pat McAfee decided to call it quits after a seven-year career in the NFL thanks to the toll a lifetime of football had taken on his body.

It turns out McAfee is a man of many talents, as he decided to spend some of his free time showcasing his stand-up comedy skills, podcasting, and chilling in the fantasy factory he constructed in Indianapolis.

Given McAfee’s charismatic nature, it’s only natural that he eventually gravitated to the world of broadcasting and has pursued a few endeavors that have included working with the WWE and serving as an analyst for ESPN, where he’s recently become a regular on College GameDay.

This year, Fox decided it was time to go toe-to-toe with GameDay when it announced it would be launching a college kickoff show of its own called Big Noon and managed to recruit Urban Meyer to provide some insight into Saturday’s slate of games.

According to Larry Brown Sports, the retired coach recently reflected on his first year on the program and decided to take a not-so-subtle shot at McAfee when he claimed no one was interested in the sideshow antics GameDay is known for.

Just interviewed Urban Meyer. At one point talked about this year doing tv, he says "I had fun – turns out folks wanna talk about football, they don't want to see jumpin' in lakes or goin on rollercoasters"
…
…I feel I may know what he was alluding to.
The man is competitive.

For reference, here’s the jump in question.

Last time I allegedly did what I’m about to do I ended up in a jail cell 🗣LETS GOOO @CollegeGameDay pic.twitter.com/bk3FolesBL

The comment quickly came to McAfee’s attention and he decided to fire a shot of his own by appearing to poke fun at Meyer for claiming he stepped down from his job at Ohio State for health reasons and that his departure had nothing to do with the scandal he had on his hands courtesy of his former assistant coach Zach Smith.

I know it can be hard to remember things but it was a river not a lake.

My mom as soon as it happened said “When you were in the air, I started having heart complications OUT OF NOWHERE”

She’s been completely fine ever since.. happy for her.