Patrick Beverley Responds To Those Bashing The Timberwolves’ Play-In Celebration 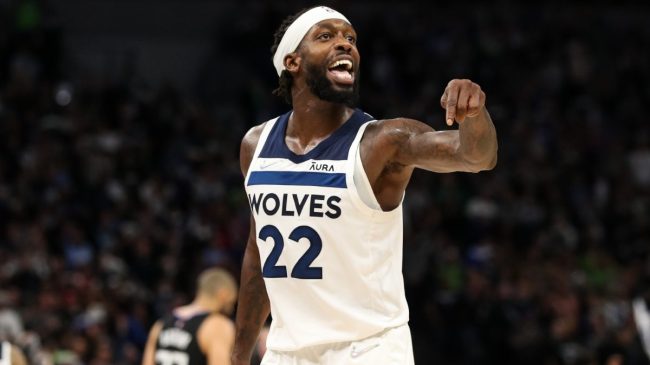 The Timberwolves are headed to the NBA Playoffs.

Minnesota knocked off Western Conference foe Los Angeles in the 7/8 play-in game to earn a date with second-seeded Memphis. That best of seven series will begin Saturday.

The T’wolves played well on Tuesday night, with stars Anthony Edwards and D’Angelo Russell leading the team in the 109-104 victory. Edwards tallied a team-high 30 points while Russell was just behind at 29 points scored.

When the clock ran out, Minnesota had booked their first ticket to the NBA Playoffs in since 2018, and just their second since 2004.

A celebration ensued, almost as if the team had won a championship as opposed to a play-in contest, which drew some criticism from media and fans. Players were jumping on the scorers’ table, jerseys were being thrown into the crowd, and tears were seen rolling down the faces of Minnesota players.

As a result, postgame shows were mocking the team, playing “One Shining Moment,” which is the NCAA over the celebration clips.

Others, including NBAers LeBron James and Kyle Kuzma, chimed in with subtle social media comments.

It did seem a bit over the top for a team that’s just landed a No. 7 seed in the upcoming postseason, but Minnesota guard Patrick Beverley was quick to respond to the ridicule, noting that this was an important hurdle to get over for the fans and organization.

We celebrating because MINNESOTA DESERVES THIS. A LOT OF PAIN THE PAST COUPLE OF YEARS. BE HAPPY FOR US 🐺❤️🐺❤️🙏🏾

Beverley says that the city deserves this after dealing with a lot of pain over the years.

He’s got a point. The Timberwolves have been to the playoffs just once in the last 18 seasons. In the three years prior to this campaign, Minnesota won just 35% of their games, finishing below .500 in each season.

Beverley wasn’t letting the naysayers stop him from being happy. He kept his mood going well after the contest ended.

When the game (and celebration) ended, Minnesota players took to the podium for comments. Beverley was asked what he had to say about beating his old team to get to the postseason.

He had one message for his former teammates.

Pat Bev not holding back 😅 pic.twitter.com/yeSKJElSQp

Note the Bud Light on the table. That energy continued in the locker room, with Beverley, among others, celebrating further.

“What I say at the beginning of the year? We going to the playoffs, ain’t nobody believe me… Weak a** Clippers, we beat their MF a**.”

Minnesota has a few more days to celebrate before gearing up for Ja Morant and the Grizzlies. Hopefully, this ride continues for Pat Bev and the Timberwolves.