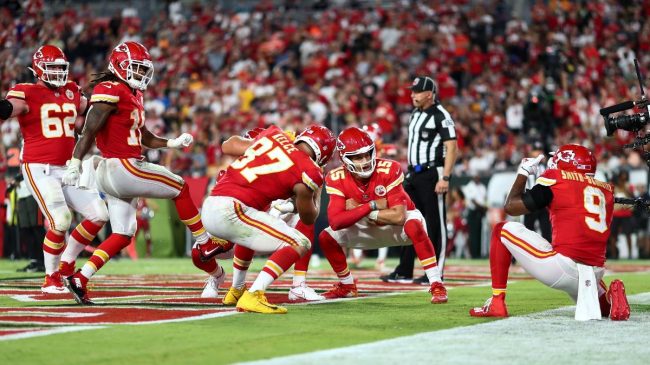 Patrick Mahomes was at his absolute best on Sunday night, as he lit up the Tampa Bay Buccaneers defense. He made amazing plays left and right and reminded everyone why he’s recognized as one of the best quarterbacks in the league. He played so well, that Juju Smith-Schuster was bewildered playing alongside the Kansas City Chiefs quarterback.

According to Cameron Wolfe, Smith-Schuster couldn’t help but share his amazement after the Chiefs beat down the Buccaneers 41-31. With Mahomes putting on a magic show, Juju Smith-Schuster claims “he’s used to being on the other side of Patrick Mahomes’ magic. Last night he said, ‘woah’ with a big smile because his quarterback is ‘special.'”

Chopped it up with JuJu Smith-Schuster (@TeamJuJu) after Chiefs put up 41 points on what was the NFL’s top scoring defense — Bucs.

JuJu told me he’s used to being on the other side of Patrick Mahomes’ magic. Last night, he said “woah” with a big smile because his QB is “special” pic.twitter.com/fCqzTN9PfK

When your quarterback is capable of making crazy plays like this, how can you not be amazed? Patrick Mahomes was at peak form against the Buccaneers and it showed. He proved to be the difference maker as he led the Chiefs to a monster win over one of the best defenses in the league.

Kansas City is nearly unbeatable when Mahomes plays as he did on Sunday. The Chiefs looked like the best team in the league, which is insane considering how good the Buffalo Bills and Philadelphia Eagles have looked.

Juju Smith-Schuster is playing a large part in the Chiefs’ success early on. He seems to be one of Mahomes’ favorite targets so far. We’re still early on in the season, so there is reason to believe that Patrick Mahomes will build stronger chemistry with his new wide receiver. If that’s the case, then things might just be getting started in Kansas City. The AFC needs to watch out!