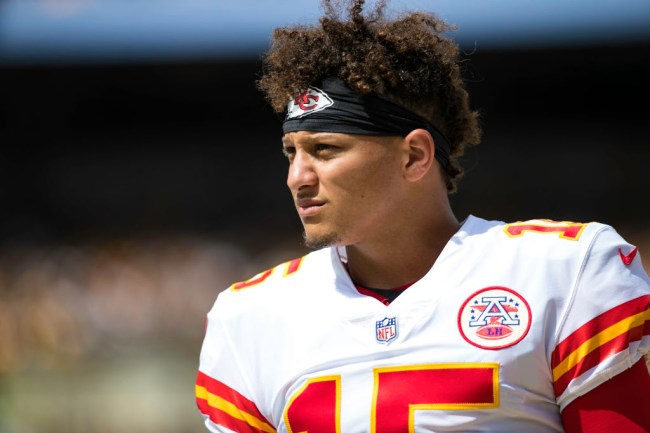 Patricks Mahomes showed a ton of promise during his time at Texas Tech, and thanks to his efforts in college, he was scooped up by the Chiefs with the 10th pick in the 2017 NFL Draft. It was pretty obvious the team viewed him as a worthy successor to Alex Smith and a potential franchise quarterback, and when he got a chance to prove himself when Smith was traded, he didn’t just meet expectations but shattered them like Stone Cold Steve Austin when he walked out to the ring at Wrestlemania 13.

Mahomes missed out on his shot to win Rookie of the Year after serving as the backup for all but one game during his first season, but after being named the starter for his second, he managed to do one better by putting on an absolute show, as he led the Chiefs to the AFC Championship and garnered MVP honors for his efforts.

He followed up that performance by helping to bring Kansas City its first Super Bowl victory in 50 years, and despite only really having two seasons of NFL experience under his belt, he’s already established himself as almost inarguably the best quarterback in the league at the ripe old age of 24.

The Chiefs initially signed Mahomes to a four-year contract worth around $16 million, but based on what he’s done so far, it was clear they had to lock that shit up for the long term. They did so by getting down on one knee and proposing with an absolutely absurd offer that resulted in Mahomes agreeing to stay in Kansas City for 10 years and $477 million, which is the largest contract the sports world has ever seen.

When you’re sitting on such a valuable asset, you obviously want to do everything in your power to protect it, and based on what Mahomes said during a radio appearance on Tuesday, the Chiefs insisted on a clause he says basically prohibits him from partaking in any recreational activity that’s not called “football”:

This shouldn’t come as much of a surprise and he’s far from the first athlete who’s had to agree to similar terms. NBA players are banned from engaging in a wide variety of activities including boxing, professional wrestling, and hang-gliding and Cal Ripken Jr. once had to negotiate with the Orioles in order to earn the right to play basketball in his spare time.

There are also a number of people who have paid the price for violating these clauses, as Aaron Boone had his contract terminated by the Yankees following a basketball injury and Jay Williams lost out on millions (and saw his basketball career come to an end) after crashing his motorcycle.

Mahomes doesn’t seem too worried, as he’s already come up with a plan, saying, “I’ll probably be sticking to football and video games for a while now.” I can certainly think of a worse life to have.