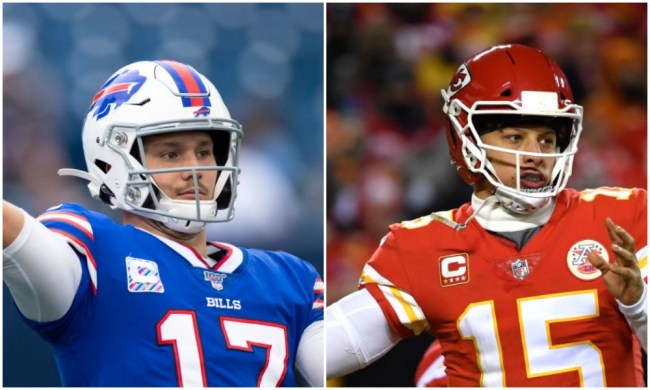 It’s not just fans that get worked up over Madden ratings, players get riled up about them too including two of the top young quarterbacks in the league.

Mahomes was so worked up about having a lesser throw power rating than Allen, he decided to challenge him to a throw-off during a recent SportsCenter Madden special. While Mahomes acknowledges that Allen has a cannon of an arm, he believes he can out throw him.

“Dude, obviously Josh has an extremely strong arm, but I’ve yet to see someone have a stronger arm than me,” Mahomes said according to Syracuse.com. “Maybe we can line up… I know we talked about maybe having a throw-off and then we can prove who really has the strongest arm.”

“I have the ultimate belief in myself. I mean he does have a strong arm, but if I put it out there like 80-85 yards… If he beats that he beats it.”

Interestingly enough, Allen essentially challenged Mahomes to a throw-off last year during an appearance on Pardon My Take.

Watching two guys throw a football as far as they can wouldn’t be the most exciting thing ever, but it would definitely be incredible to see if Mahomes or Allen really could chuck it over 85 yards.

The Chiefs and Bills are set to play on Thursday Night Football on October 15. Here’s to hoping we see the two put together some sort of duel during warmups so this debate can be settled once and for all.