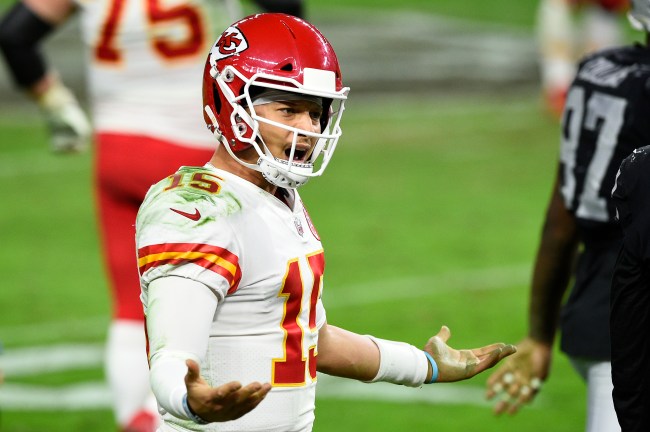 When Patrick Mahomes led his Kansas City Chiefs to a comeback victory over the Las Vegas Raiders during a Week 11 Sunday night game, he really did a number on a few people. Not only did he figuratively stab the hearts of Raider Nation, but he singlehandedly ended any chance of my fantasy football team winning with that late touchdown to Travis Kelce, and, probably more importantly, ruined the chance of one sports gambler walking away with thousands.

According to B/R Betting, someone put together a wild, nine-leg parlay for $25, which included Patrick Mahomes going over 16.5 rushing yards versus the Raiders. The payout? Nearly $7,000. Every single one of the legs hit during the Sunday Night Football game, meaning this bettor had some rooting interest in the Chiefs’ quarterback — until it happened: A terribly unlucky bad beat.

Following a Derek Carr interception with 19 seconds left that gave the ball back to Kansas City, Mahomes went from 18 rushing yards to 16, meaning the sports gambler missed out on thousands. Heartbreaking.

Mahomes’ kneel on the last play cost him $7K 🤮

I mean… speechless. This just kills you, even if you don’t know the poor soul who missed out on the opportunity to win thousands of dollars. It’s. Just. Not. Fair.

As somebody who has had that happened to him before — albeit during a fantasy football game years ago that cost me a chance of getting into my league playoff after Drew Brees kneeled-down to end a game — I can at least feel the anger of this sports gambler. It’s like watching disaster happening in real time, because you just know each kneel down is costing you money, and there’s nothing you can do to stop it.

After people on Twitter saw the news about Patrick Mahomes’ kneel downs wrecking this gambler’s chance at thousands, there were all sorts of reactions. Take a look at some of them below.

I see they're conditioning you quite nicely. Carry on, $.oldier

That shit shouldn’t count on stats

@PatrickMahomes pay this man, he trusted you lol

Over the past few weeks alone, we’ve seen sports gamblers get owned by bad beats. Whether it was this kneel down from Mahomes against the Raiders, the Browns’ Nick Chubb running out of bounds instead of taking a sure touchdown against the Texans, or the Kyler Murray-DeAndre Hopkins Hail Mary to end the game against the Bills, they all serve as a friendly reminder that betting on sports is not for the faint-hearted.