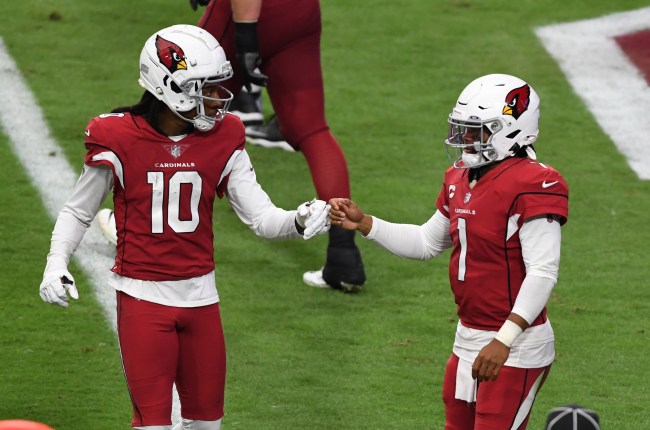 When Kyler Murray hit DeAndre Hopkins on a last-second Hail Mary against the Buffalo Bills during Week 10 of the NFL season, dreams were shattered. No, I’m not only referring to those in Bills Mafia — with some, undoubtedly, prematurely celebrating by going balls to the wall as only they can — but one very unlucky sports gambler who saw a wild parlay get crushed with the play.

According to David Purdum of ESPN, when Murray scrambled to his left, outran defenders, threw an off-balance heave to the end zone to where Hopkins was, a sports bettor lost some serious cash. The gambler created a wild parlay worth $2,000 at the William Hill sportsbooks, and had Dustin Johnson winning The Masters, Aryna Sabalenka defeating Elise Mertens in tennis, the New York Giants beating the Philadelphia Eagles, the Tampa Bay Buccaneers covering versus the Carolina Panthers, the Pittsburgh Steelers winning against the spread against the Cincinnati Bengals and, lastly, the Bills beating the Cardinals.

And it almost all came to fruition… until the unbelievable Kyler Murray-DeAndre Hopkins Hail Mary.

So how much was this sports gambler going to win had the Buffalo Bills defense just knocked it down!?! How about a payout of a cool $96,947.11, which is nothing more than one of those “I was so damn close” moments. Yep, that’s how much that last-second heave sucks. One second you think you’re winning over $96K, the next, poof, you’re out a couple grand. Man, that’s unlucky.

At least the bettor who lost on the Kyler Murray-DeAndre Hopkins Hail Mary wasn’t alone in the pain of missing out on big money. Remember, Browns running back Nick Chubb cost gamblers cash when he broke free for a sure touchdown towards the end of a game against the Houston Texans… only to step out at the 1-yard line to keep the Texans’ offense from taking the field again. The result? A three-point victory for the Brownies — which didn’t cover the spread.

Sports gambling is hard, guys — and can be so unfair. It’s a thrill playing each and every day knowing there’s at least a chance to win big. Sometimes it happens. Many times it doesn’t. But missing out on thousands in such devastating fashion is one of those times where you look yourself in the mirror, take a deep breath and just repeat the words “serenity now” over and over.