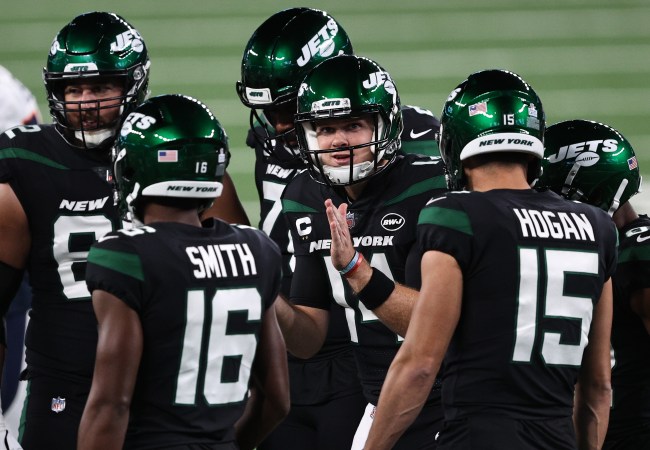 What else is there to honestly say about the New York Jets that hasn’t already been said? The team is pathetic, and, for some reason, are afraid to fire head coach Adam Gase. The franchise is inept, often reaching on players in the draft who haven’t panned out so far. And, even when Jets fans get excited about bringing a star to town via free agency — as was the case in 2019 with running back Le’Veon Bell — Gase flames out and argues with Bell about the decision to offer such big money to the player.

Now, look, as a diehard Cleveland Browns fan myself, it’s not as if my favorite team has done much better over the past 20 years. But with the Brownies sitting at 2-1 at the moment, at least they’ve given me some hope; albeit false. Now imagine being my colleague here at BroBible Eric Ital, who actually has to sit through the mess that the New York Jets have become (and have been) for the past decade — which was their last playoff appearance — and knowing going into every single game that they stand zero chance of winning. That’s brutal.

Ah, yes, watching the Jets lose every week has to be terrible for fans. But want to know what’s even more terrible? Watching the Jets be so pathetic that the team’s Thursday Night Football loss against the Denver Broncos cost a sports gambler a chance at $17,000. No joke.

Thanks to Bleacher Report Betting, we got to see the ticket, with the bettor putting together a pretty slick, $1,000 parlay that involved the Lakers winning Game 1 of the NBA Finals, both the Dodgers and Cardinals winning in their MLB Playoff matchups, and a couple other bets against the spread. Everything else hit, so all the Jets had to do was win Thursday night against Denver — which, against a third-string quarterback, they couldn’t even do.

$17K parlay comes down to the Jets tonight…

Ballsy move by the sports gambler here for going all in, but, hey, to win big you’ve got to bet big. Unfortunately, doing anything that involves the New York Jets winning is never a wise decision, and something telling me this bettor will avoid taking a chance on including the shitty team in any future parlays. You hate to see it, Jets fans, but there’s always next year… or next decade.