F You, The Browns Are Still Making The Playoffs 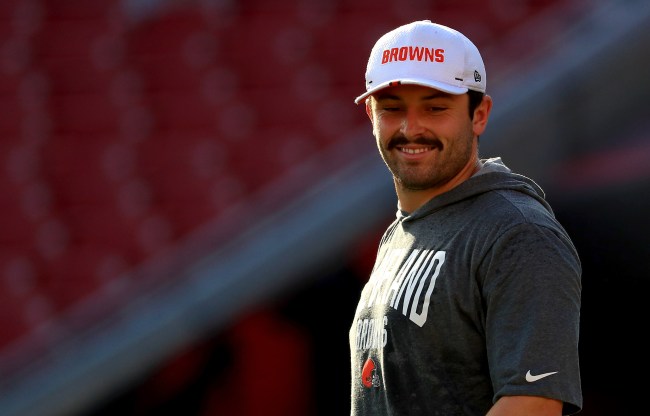 “The Cleveland Browns are pathetic.”

“The Dawg Pound is a fucking joke.”

“Odell Beckham Jr. doesn’t even want to play in Cleveland.”

“The Browns will start 0-5, bench Baker, trade OBJ, and be on the hunt for another head coach by November.”

“I see, maybe, four wins on their schedule this year.”

Yep, this is what it’s like to be a lifelong Cleveland Browns fan, guys, where it’s way too easy for people to shit all over the dysfunctional franchise for sucking since its “rebirth” back in 1999.

Over that time, I’ve seen starting quarterbacks cycle through like options on a dating app. I’ve seen head coaches come and go before they can even pay first month’s rent. I’ve seen turnover in the front office annually, as if it were a regular holiday.

Want to know what I haven’t seen? Much winning. As the Browns have just one playoff appearance and an embarrassing two seasons with a winning record since 1999.

But while everyone from Stephen A. Smith to Colin Cowherd shits all over Baker Mayfield and the Cleveland Browns — especially after a disgusting 38-6 shellacking by the Baltimore Ravens in Week 1 of the 2020 NFL season — I’m not giving up hope on their playoff chances just yet, and actually went through the task of coming up with legit reasons why it’ll happen.

Sure, I’m a fan, and defending your team from outside criticism is what we do best (especially in Cleveland). But screw any and all of your hate, because the Browns are destined to be a playoff team this NFL season. Book it — and then go fuck yourselves for ever doubting them.

Baker Mayfield Loves Being The Underdog

Baker Mayfield’s story is well-known by now, as the quarterback went from overlooked high school recruit to the Heisman Trophy winner to the No. 1 overall pick in the 2018 NFL Draft. Want to know how he achieved all that? By being a fucking stud and using all that hate from people as a chip on his shoulder.

Now, don’t get me wrong, since Baker got married in 2019, the dude has gotten a little soft — marriage does that to some guys, so I’m told. But this is the year Mayfield finally gets his mojo back. It’s the year he stops thinking about firing back at guys like Cowherd on social media and tries to shut them up by balling out each week.

We’ve already seen a less abrasive Mayfield than in the past. And while the crotch-grabbing, shit-talking version of him might be gone, here’s to believing the dude rediscovers that fire in his belly and tears it up over the next 15 weeks of the NFL season — because his future as a starting quarterback sort of relies on him doing it.

Week 1 Was Pathetic, But It’s One Damn Game

Dak Prescott and the Dallas Cowboys.

Want to know what all of these teams have in common with the Cleveland Browns? They’re each 0-1 after one week of the NFL season.

Brady’s Bucs were looked at as potential record-breakers. Dak’s Cowboys were supposed to be nearly unstoppable on offense. The 49ers were feared to be just as good (if not better) defensively as the team that went to the Super Bowl last season. Instead, they all shit the bed.

The Browns were no different in Week 1. In fact, that’s sort of been their M.O. since 1999, as the team hasn’t won a season opener since 2004, and regularly starts 0-1. So to suggest I’m scared or giving up on the season or think it’s time to blow things up after just one loss is stupidity at its finest.

With upcoming home games against the Cincinnati Bengals and the Washington Football Team, the Brownies could be sitting 2-1 and all will be right in the world. Just wait and see.

Have You Seen The Players They’ve Got On Offense?

Mayfield. Beckham. Jarvis Landry. Nick Chubb. Kareem Hunt. Austin Hooper. The Cleveland Browns offense might not have accomplished much in their first game together in 2020, but, shit, how in the hell can you say with a straight face that these guys won’t all of a sudden start balling out soon?

In an offseason that saw a new head coach (Kevin Stefanski) implement a new scheme with new verbiage without much practice, it was predictable that Cleveland would lose to Baltimore. It was an ass-kicking of epic proportions, but nothing that some practice can’t fix.

The defense sucks balls — so it’s on the offense to put up loads of points to win games. Once Baker gets comfortable with his upgraded offensive line and trusts his reads, don’t blink, because you may miss some big plays (and lots of touchdowns) by these boys.

Contrary to what you’re probably thinking at the moment, I’m a realist, and it’s easy to see that Odell Beckham Jr. may not be a good fit in Cleveland.

He struggled last season. He got off to a horrid start in Week 1 of this new NFL season. And there are already whispers that he and Mayfield aren’t on the same page after four quarters together this year. For that reason, OBJ may have to go.

Baker’s forcing the ball to his No. 1 receiver and it’s killing the offense. Instead of taking the simple throw, my QB1 is staring down OBJ to try and make him happy. Anyone who knows anything about football knows that’s never a productive way to win games.

Now, here’s something I’m just going to toss out there: If the Browns find themselves at 4-4 heading into their bye week midway through the season and have a shot at the playoffs, maybe they should trade OBJ. Yep, I said it.

Unless the former All-Pro wideout time warps back to the dominant superstar he was during his first few years in the league between now and then, Cleveland needs to dangle his name on the trade block. Get an immediate starter on defense and a couple draft picks (2nd and 4th rounders) and cut your losses. Start Rashard Higgins opposite Landry. Pound the rock with two Pro Bowl running backs. Rely on play-action. Slow the game down and make it easier for Mayfield.

Beckham’s not the problem in Cleveland. But he is a distraction that’s causing Baker Mayfield to press instead of going with the right read way too often. Trading him would resuscitate the offense and actually lead to more balance.

When all else fails, I’m reminding myself that it’s 2020 and the world has proven that anything is possible.

We’re in the middle of a fucking pandemic that won’t end anytime soon. Wildfires are ravaging the west coast. Hell, we’ve even seen two hurricanes drop down at once on the Gulf Coast. Considering all that’s happened in the past 9.5 months alone, how in the fuck can you tell me that seeing the Cleveland Browns in the NFL Playoffs would be the wildest thing of this wild year? You can’t. That’s why it’s going to happen — don’t @ me.