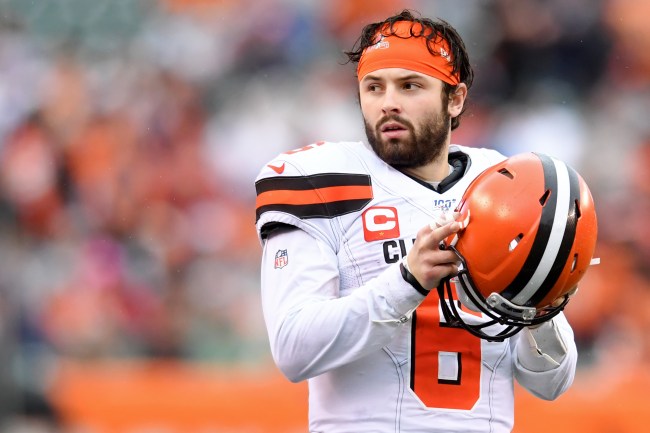 The Colin Cowherd-Baker Mayfield feud is alive and well, guys. Despite no NFL offseason activity — other than free agency and the NFL Draft — the longtime radio personality and the Cleveland Browns quarterback still seem to be virtually tackling one another, with Cowherd throwing the latest shot in this years-long rivalry.

As we’ve seen over the years, Mayfield and Cowherd have gone back-and-forth with a number of jabs towards each other, with Baker even going as far as calling Colin Cowherd a liar around this time last year, and then the radio host firing back a few months later by claiming the 2018 No. 1 overall pick wasn’t as good as this year’s top selection, Joe Burrow. Ah, yes, you’ve got to love a good ol’ fashioned argument between a couple guys, right?

While Mayfield preps for a critical season — one in which it could be make or break for his tenure in Cleveland — Cowherd’s already taking shots at the dude, recently saying that the two-year starter’s nothing more than a backup signal-caller with a strong arm. The reference came when the FS1 host was comparing Mayfield to his new backup, Case Keenum, simply answering a question about Baker’s job security, and if he’s in jeopardy of losing the starting gig to Keenum. As you’d imagine, the reply was quite a dig at the current Browns starter.

"Baker Mayfield is Case Keenum with a stronger arm… It is all lined up for him. He will be a playoff QB this year." — @ColinCowherd pic.twitter.com/mk1FB5I3pF

You’ve got to give Colin Cowherd some credit here, because the guy sure does know how to troll — especially in his feud with Baker Mayfield. The fact that he pats himself on the back for his previous comparison between the two a couple years ago is classic, and then to show the stats between the two players since 2017 is just twisting the knife in Mayfield’s abdomen, really going out of his way to show that Keenum’s numbers are actually better.

Of course, Cowherd doesn’t stop there, with the radio host just going deeper and deeper in his criticism of Mayfield, talking about how he’s not a No. 1 overall pick, and then calling out a few names (Deshaun Watson, Carson Wentz, Russell Wilson) who are “able to overcome a lot of average,” to make their teams better. And, finally, just to really stick it to his longtime rival, Cowherd completes his hot take with this: “Baker needs everything lined up” in order to get to the playoffs — which is something the host does think will happen for the Browns this upcoming season.

While there may not be a lot of drama happening in the NFL at the moment, getting our latest chapter in the Colin Cowherd-Baker Mayfield feud is enough to hold us over for a little while. And, if history is any indication of what might happen next, we can all probably expect some sort of snarky reply from the Cleveland Browns quarterback to try to defend himself, burn Cowherd and keep this rivalry nice and healthy. Your move, Bake.