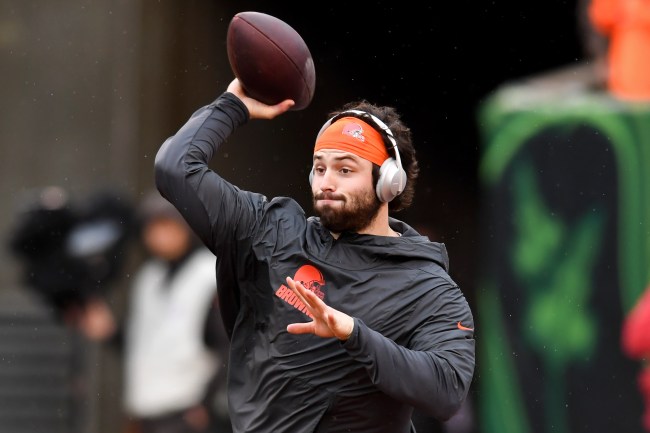 Colin Cowherd and Baker Mayfield have had a serious feud going for the past several years, ever since the outspoken FS1 radio host criticized the former Oklahoma Sooners star leading up to the 2018 NFL Draft by saying he preferred his quarterbacks not be seen being tackled by police while drunk — as Mayfield was while in college. It has been playful at times, but also mega tense, as the two guys go after one another as frequently as possible.

About to enter his third season with the Cleveland Browns in 2020 — and already work under his fourth head coach — Baker Mayfield needs to have a bounce back season to prove that he’s capable of being the franchise quarterback. Naturally, Cowherd doesn’t see it happening, and he voiced that opinion in a big way on a recent episode of his show, The Herd with Clin Cowherd.

Following Joe Burrow’s dominant performance in the College Football Playoff National Championship Game, the LSU signal-caller — who’s projected by many to be the No. 1 overall pick by the Cincinnati Bengals in the upcoming NFL Draft — Cowherd dogged Mayfield by proclaiming Burrow’s already a better NFL quarterback. Take a look at the hot take below.

“The loser last night is Baker Mayfield. … This year, the AFC North was wide open,” Cowherd said on The Herd Tuesday morning. “Lamar was still a baby. Big Ben got hurt and the Bengals were playing Ryan Finley. But Baker was doing 26 commercials and was simply not mature enough to take it over. Now, Joe Burrow enters the division … and Baker’s now suddenly the fourth best quarterback in that division.”

Those are some serious fighting words, and Mayfield’s sure to respond back in some way, right? That’s sort of his M.O. at this point — especially when it comes to Colin Cowherd.

With Burrow and Mayfield (presumably) about to be in the AFC North together, meaning they’ll go head-to-head two times each regular season, Cowherd thinks Baker and his Browns are in serious trouble. While the radio host is known for his outrageous takes, given the fact Lamar Jackson also resides in the same division and the Steelers are on the hunt for their future signal-caller, things may be tougher for Mayfield as he tries to turn the dormant Cleveland franchise around.

Sure, Cowherd can be a troll — and this is just the latest example since Burrow has yet to even make it to the NFL — but if all goes as assumed, his take could prove to be true. Guess it’s time for Baker to put up and prove him wrong come next season.