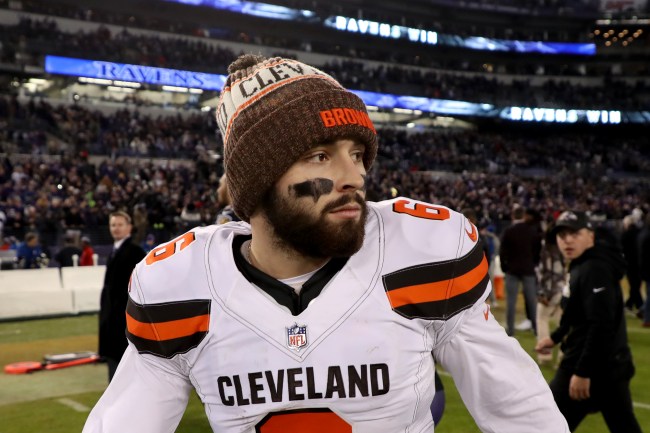 Baker Mayfield plays with a enormous chip on his shoulder, which led to him seeing success during his collegiate days with the Oklahoma Sooners, ultimately leading him to a Heisman Trophy victory and being drafted No. 1 overall in the 2018 NFL Draft, and then putting up big numbers during his first pro season. So when anyone comes at the Cleveland Browns quarterback, they better be ready for Baker to pull out all the stops to make sure that he gets the last laugh.

Case in point? Coin Cowherd, who has been one of Baker Mayfield’s biggest critics over the past few years, with the FS1 radio host constantly challenging both Mayfield and the Browns franchise. While the two did have a memorable exchange last summer after the Browns selected the player, which seemed to add a respect, but, man, it sure didn’t put out the fire.

After the war of words between the two has reignited in recent months — with Baker Mayfield blasting Cowherd a couple different times over the host’s opinion about Odell Beckham Jr. landing with the Browns — the quarterback has taken things to a whole new level. That’s because Mayfield is actually selling anti-Colin Cowherd shirts, with one having phrase “Fact: Cleveland. Fiction: Cowherd” emblazoned across the chest, and the other saying “The Land vs. The Herd.” Take a look at the shirts below.

Baker actually had t-shirts made😂😂😂 pic.twitter.com/qaYlrBTpfd

Regardless of your personal opinion of him, this is pretty awesome of Baker Mayfield. Not only is he sticking up for his teammates and entire franchise by standing on the front line to go against Colin Cowherd, but, hell, he’s standing for an entire city at the same time. Plus, let’s not ignore the fact that this is a savvy business move, too, because Browns fans are some of the most passionate in all of sports, meaning they’re bound to eat these $30 shirts up in the Dawg Pound.

After hearing about Baker Mayfield’s latest stunt to troll him, Cowherd had some fun with the whole thing, saying this on his show:

The radio host also praised Mayfield for “getting it,” saying that the back-and-forth between the two makes for solid radio and TV — which helps promote both of their brands. If Mayfield can lead the Browns to success, he may get the last laugh in this feud, though.