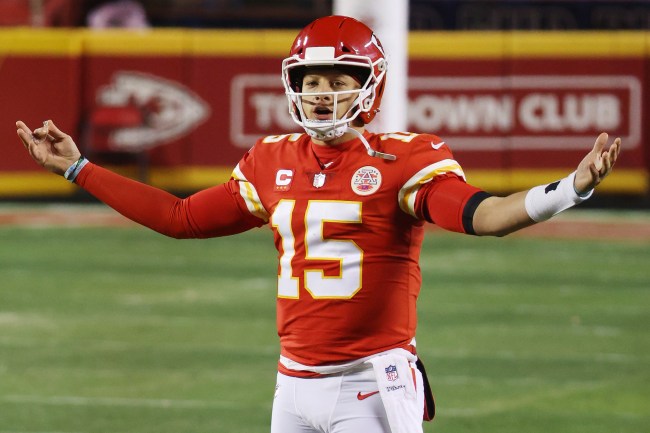 Patrick Mahomes apparently has a new logo but he might have to reconsider releasing it after initial reactions from fans.

On Friday intellectual property lawyer Josh Gerben of GerbenLaw.com noticed that Adidas filed a new “PM” logo that appears to be meant for upcoming clothing and sneaker releases for the Kansas Chiefs QB’s brand.

Adidas has filed a new trademark for a 'PM' logo (see below).

The logo appears to be for @PatrickMahomes.

The trademark filing was just made on March 29th and claims Adidas has an "intent to use" the logo soon.#ChiefsKingdom #Mahomes#adidas pic.twitter.com/qYn0kXUrVW

Looks like adidas has filed for a new logo for Patrick Mahomes with the US Patent & Trademark Office. @JoshGerben had it first.

Thinking they could have had a couple more eyeballs on this one 😳 pic.twitter.com/orE22S0akc

Fans were quick to roast Mahomes’ new logo with some hilarious jokes/memes on Twitter.

That is the power button on a gaming PC you can’t tell me otherwise https://t.co/j5alPK7vCO

Player logos that are just their initials in a weird shape are played out to me. I know not everyone can do an MJ silhouette either, but surely you can do better than just PM? How about playing off of one of the billion nicknames he has or something?

So are we referring to him as “the artist formerly known as Patrick Mahomes” https://t.co/n9hK1k6aPm

Looks like a rip of the Quake logo https://t.co/7h0ePLU80o pic.twitter.com/hfXSj0DoaA

Did Mahomes just start a new clan on Warcraft? https://t.co/r3ZvzOwxuu