Patrick Mahomes, Tyreek Hill And Other NFL Players Are Angry The Broncos Might Not Pay Ja’Wuan James $10 Million Salary After Season-Ending Injury 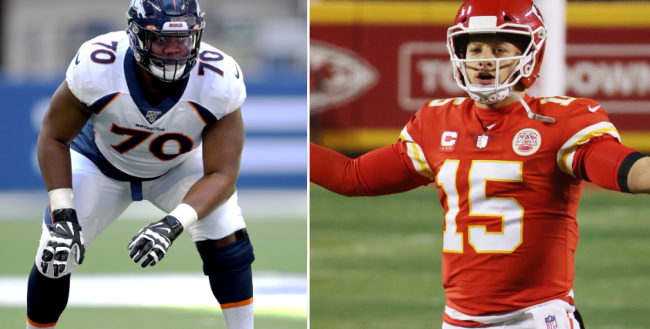 The Denver Broncos find themselves forced to make a difficult decision this offseason.

On Tuesday afternoon, Broncos offensive Ja’Wuan James suffered a possible season-ending injury when he tore his Achilles during a workout away from the Broncos’ facility.

Team sources told ESPN that James suffered a torn Achilles tendon in a workout away from the Broncos’ facility. The injury is considered season-ending, and James will have surgery to repair it.

Considering that James’ injury occurred away from the team’s facility it could be classified as a “non-football injury” and the Broncos would not be obligated to pay James $10 million salary owed for this season.

The #Broncos are in a precarious situation with OT Ja'Wuan James, who suffered a season ending achilles injury while working out off-site. Denver now has the option to not pay his $10M salary this year, even though it’s fully guaranteed.https://t.co/6O0xTerXMb

Broncos' OT Ja'Wuan James suffered a season-ending torn Achilles working out today away from the team facility, per sources. James' $10 million salary for the upcoming season now is in jeopardy being that Denver no longer is obligated to pay him with him working out off site.

Broncos' OT Ja'Wuan James’ contract tolled last year, so he was playing under his 2020 contract this year, which had $10 million guaranteed for skill and injury, and another $10 million in 2021. So it’s a $20 million potential torn Achilles injury today. https://t.co/jj10uOm298

It is worth noting that the reason James wasn’t working out at the team facility is because Broncos players collectively decided not to show up to voluntary workouts due to Covid safety reasons.

A statement on behalf of the Denver Broncos players: pic.twitter.com/b7ZQZ1Z7PY

Patrick Mahomes, Tyreek Hill, and other NFL players were not happy with the fact that the Broncos might pay James’ salary this year.

So they are going to take his contract for working out in the off-season??? https://t.co/rJK7xrqpv6

so do we just not workout or what ? https://t.co/E9ZzIZiAfw

Half these replies don't understand a players offseason obligations. Many don't understand that you're expected to work out when away from the facility. He wasn't "going against" his contract lol. https://t.co/uzmap2kwhC

While those players aren’t happy with the situation others are laying blame on the NFLPA for advising players to not show up to team facilities this offseason.

I wonder if the NFLPA, which pushed its members to avoid reporting to team facilities (where players would have injury protections) this offseason, will make Ja'Wuan whole. https://t.co/nzdtWiakIi

This was always the risk with the NFLPA advising players to stay away from the team facilities due to Covid and it seems really unfair. But rules are rules and it's in the contract. https://t.co/Q73e3KCnF5

They are. The PA is getting a lot of players to exercise the voluntary part of this process and stay at home. A major downside is it shifts 100% of the injury liability to the player, not the team. And this is what can happen as a result. https://t.co/Lv9eUHAEHm

Of course I feel sorry for him. What I want is for him to still make his money, which is what would have happened if he worked out at the team facility like in any other year. But the PA got him to stay at home and now he’s not entitled to his previously fully guaranteed salary. https://t.co/AaflpaHuwf

Doesn’t change the fact that the contracts we sign contain language stating that if we get hurt outside the facility, they can void our deal. Always been this way. It’s a very real possibility and a major downside to skipping OTAs. And that risk should be well known to players. https://t.co/uZYnMsBXQE