Arsenal Legend Patrick Vieira Squares Up With, Absolutely Punks Loser Everton Fan Who Tried To Step To Him 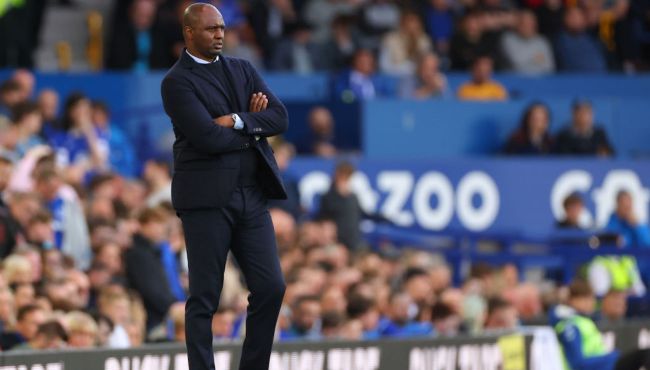 This article is about Everton Football Club, located in Liverpool, England. I am a Liverpool Football Club fan, which is located about a mile away from Everton. To compare the two to the Mets and Yankees wouldn’t be quite accurate, as there’s no *true* bad blood between those two teams. The more apt comparison would be if the Yankees and the Red Sox existed in the same city. Point being, if you’re looking for an unbiased opinion about Everton, to paraphrase the great Tyrion Lannister, you’ve come to the wrong place.

On Thursday, Everton — facing the prospect of relegation with just two games remaining — found themselves in a dire situation as they were down 2-0 to Patrick Vieira’s (who is a Premier League legend in his own right due to his trophy-winning years with Arsenal) Crystal Palace at halftime.

To their credit, Everton stormed back in the second half to ultimately win the game by a score of 3-2, which resulted in the type of pandemonium that only soccer can produce. Even though I despise Everton, the scenes of their celebrations were inspiring.

Until they weren’t. Without any sense of self-control or respect for the ongoing game, Everton fans stormed the pitch with five-plus minutes remaining on the clock, which is quite a sad look for a club that likes to consider itself among England’s most prestigious. The scenes become even more pitiful, in fact, when you consider that Everton has had the eighth-highest net spend among European soccer teams over the last ten years (€429 Million). That’s higher than the likes of Chelsea, Inter Milan, Bayern, and Liverpool — all of which have won league titles in recent years.

Goodison after that Calvert-Lewin goal 🤯 pic.twitter.com/QC2YYsg1te

While the fans ultimately cleared the field to allow the game to finish, they returned once again when the clock officially ran out, once again producing scenes that teetered between incredible and disgusting.

The disgusting bit came when an Everton fan approached Palace manager Patrick Vieira with apparent ill-intent. This, however, was an unwise move, as Vieira — who built up a reputation as one of the league’s most badass players during his day — retaliated immediately and sent the classless Everton fan scurrying for safety.

Patrick Vieira retaliates after being accosted by an Everton fan on the pitch after the game pic.twitter.com/g0HuTlpf7z

There's not enough beer in the world to make me decide to run on the pitch and get in the face of Patrick Vieira https://t.co/oUq0KEzS6D

They dont know Vieira from the 00’s. The suit has them fcked up. https://t.co/Xl3A8ObM9t

So, congrats to Everton for pulling off the otherworldly accomplishment of finishing 16th in the Premier Leaue, I guess. Whoopty-Do, Basil!