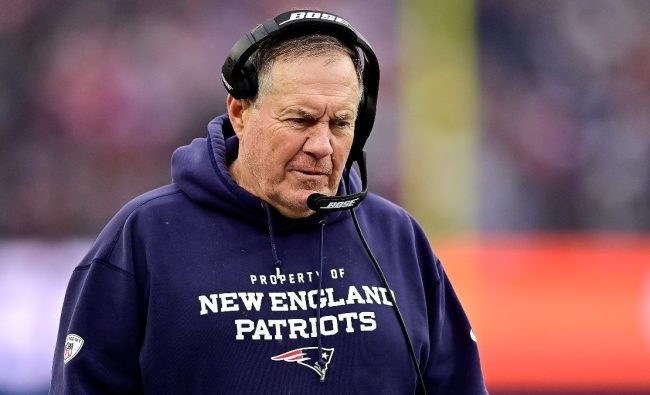 The New England Patriots hope to improve on last year after missing out on the playoffs altogether. However, the front office hasn’t made many exciting moves and it sounds like the fans are beginning to worry. On Monday night, the fanbase reacted to Bill Belichick’s bold claim regarding the Patriots’ defensive ace in the hole.

According to Mike Reiss, the evil genius himself believes that Jahlani Tavai is going to play a key role for New England this upcoming season. Belichick claims that he sees Tavai as a major asset to the Patriots’ defense and special teams. That’s all fine and dandy, but based on his past production, the fans seem a tad concerned about Bill Belichick’s enthusiasm.

Bill Belichick, on @SiriusXMNFL with @PatKirwan_NFL and @JimMiller_NFL, said of LB Jahlani Tavai: "I think he'll be a big factor for us this year, on all four downs; not just defensively but also in the kicking game."

Of LB corps, he says: "I think we have good depth there."

Jahlani Tavai is entering the third year of his career. He played a minimal role in the Patriots defense last season. Through 13 games, Tavai recorded just 14 total tackles and a fumble recovery. With that in mind, the fans might have a point, as many of them disapprove of Bill Belichick’s bold claims. Even Zack Cox, a Patriots beat writer is a bit weary of the idea.

Pretty strong review from Bill Belichick on an LB who only played 56 defensive snaps last season.

It’s unclear whether or not Jahlani Tavai actually earns a major role. Regardless, the fans don’t seem to be happy about it at all. Considering Tavai was near the bottom of the Patriots’ depth chart last season, Kyle here might have a point. Other fans pool in their takes as well.

I'm gonna need some time, if Tavai gets serious snaps on defense this is going to be rough. https://t.co/2mhU1dLvoL

Worst day of my life https://t.co/ge3jDtJsjT

I hope this is a joke Tavai isn't very good https://t.co/ZxDfqWZ8Do

We’ll see what’s in store for the Patriots and the defense this year. New England didn’t make many waves in upgrading the roster this offseason but should still be competitive. It’ll be a tough year though, considering the Buffalo Bills are pegged as a Super Bowl favorite while the Miami Dolphins made massive moves to improve the roster. Regardless, fans aren’t too happy with Bill Belichick’s latest claims but New England will aim for a playoff appearance anyway.