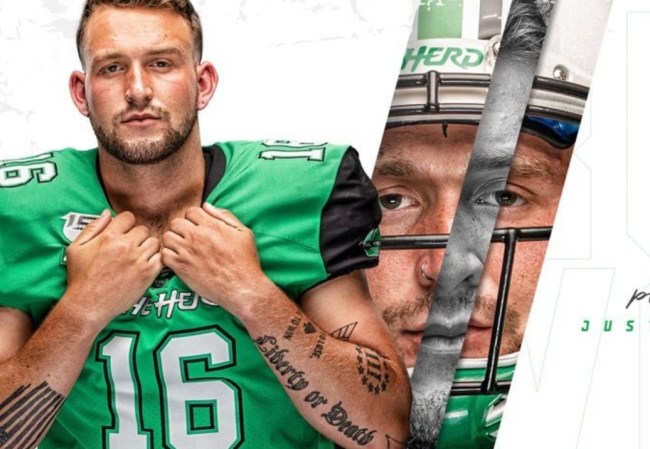 On Saturday afternoon the New England Patriots drafted kicker Justin Rohrwasser, who was immediately immersed in controversy over on of his tattoos.

Rohrwasser, who kicked at Rhode Island and then Marshall, has a tattoo on his left forearm features a “III” symbol, which represents a very controversial right-wing militia group called the “Three Percenters”.

For those unaware, 3 Percenters are a super far right military group. pic.twitter.com/TvkKWEhJpe

DISCOURSE! I DEMAND IT! pic.twitter.com/x2ONruBNWO

The Three Percenters were founded back in 2008 the same year Barack Obama was elected president and advocates for individual gun rights while opposing federal government involvement in local affairs. Members of the group infamously served as guards for white supremacist protesters in Charlottesville, Va., in 2017.

Rohrwasser was asked about the tattoo and claims he got it as a teenager and it’s not something he represents.

“I got that tattoo when I was a teenager,” “I had a lot of family in the military, and I thought it stood for a military support symbol at the time. Obviously, it evolved into something that I did not want to represent. When I look back on it, I should have done way more research before I put any mark or symbol like that on my body. It’s not something I want to represent. So, it will be covered.”

Rohrwasser has family in the military so he wanted to get tattoos to support them. He admitted he should've done more research (he was a teenager). He seems pretty embarrassed by the situation.

Many questioned Rohrwasser’s sincerity and wanted the media to ask him follow-up questions about the tattoo.

were there followup questions or was this really enough?

important followup question: what does "covered" mean? covered by new tattoos? just covered by an armband on the field but out the rest of the time? https://t.co/tdhgq8s4Mm